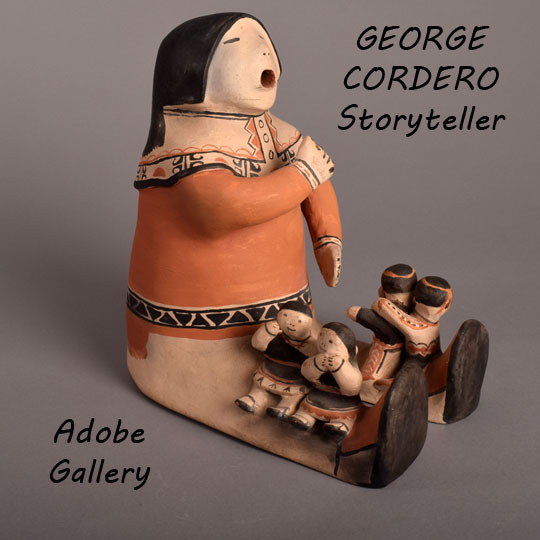 Cochiti Pueblo artist George Cordero followed in the tradition of his mother, Helen Cordero, in making a male pottery storyteller figurine with eyes closed, mouth open and children on his legs.  His strong black hair hangs down his back and partially obscures the painted collar draped over his shoulders.  The collar is beautifully designed with typical Cochiti designs.  His shirt is colored a deep orange and he wears a black belt.

Two boys sit on his left leg and two girls on his right leg.  The boys are highly dressed and wear headbands.  The girls are dressed in traditional pueblo dresses, off one shoulder and over the other one.  The adult male has his arms in motion to emphasize the story he is telling.

Helen Cordero taught all her children and grandchildren how to make storyteller figurine pottery and it is often difficult to tell their work from that of their mentor.  All of them followed her style accurately. In this unique and collectible figurine, George Cordero very much presents to us a figurine like those of Helen’s.

George Cordero (1944-1990) was the father of Buffy Cordero.  He was not a prolific pottery making artist but made storyteller figurines primarily because his mother, Helen Cordero, expected him to do so. George passed away in 1990, four years before his mother passed away.  Sometimes, George collaborated with Helen and they co-signed the completed work. George signed this one alone, so it is assumed he was the sole maker of it.

Condition: the GEORGE CORDERO Male Storyteller with 4 Children is in excellent original condition.  It was purchased by Adobe Gallery in 1997 and sold to a client in January 1998 from whom we now have it back to sell again.