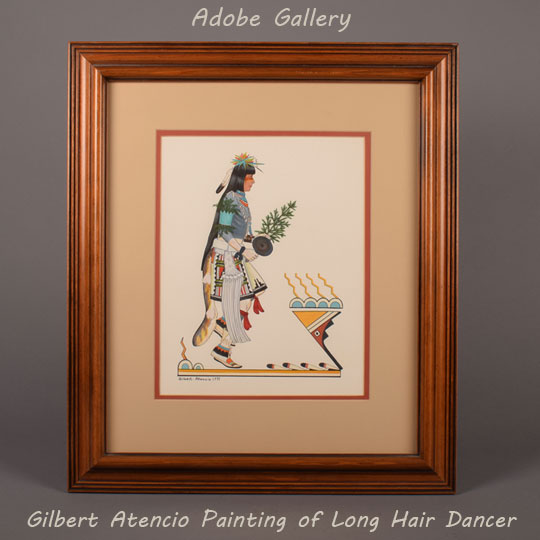 This original painting was created by San Ildefonso Pueblo artist Gilbert Atencio.  The artist is known for his exceptional technical abilities and keen eye for detail, and this piece is another fine example of his talent.  Atencio’s subject in this piece, as described to us by a friend from San Ildefonso,  is “A long hair dancer, a men’s dance. Very simple but very important.”  His ceremonial dancers are always a pleasure to study up close, so we are always happy to come across his works.

For this image, Atencio focused his attention on a single dancer.  This zoomed-in perspective allowed for remarkably fine work with each piece of clothing and paraphernalia.  Atencio’s paintings always excel in this regard, but this single figure piece truly shines.  His color choices—again, always a strong point—are similarly noteworthy.  Here, they’re bold and bright, and fortunately do not appear to have faded at all over the years.  A variety of colored elements appear below the dancer’s feet, with inverted cloud and lightning designs reaching up toward the sky.  This crisp, bright image is an excellent example of Gilbert Atencio doing what he did best.

The painting is signed Gilbert Atencio and dated (77) in lower right.  It is framed in a carved wood frame with a bright finish, under two layers of matting in complementary tones.

Atencio will certainly be recognized as one of the finest pueblo painters of the second half of the 20th century—not only from San Ildefonso Pueblo, but among all pueblo painters.  His attention to detail was unequalled. A professional medical illustrator at Los Alamos National Labs, Atencio carried his precise drawing and painting skills over to his fine art paintings.  His crisply drawn and clearly colored renderings of ceremonial and home life have, since around 1947, been favorites in many shows. Much of Atencio’s inspiration for paintings came from stories his aunts told him about their lives. His style varied from the traditional flat style done early in his career, to more realistic paintings done later in his career.  Atencio passed away in 1995 and remains highly regarded by collectors.

Provenance: this Gilbert Atencio Painting of Long Hair Dancer is from a private Texas collection