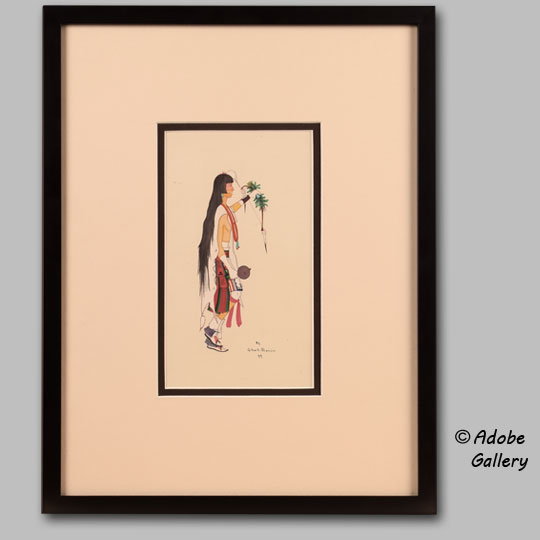 This original painting was created by San Ildefonso Pueblo artist Gilbert Atencio.  We reached out to a friend from San Ildefonso for assistance with identifying the dancer, and he provided the following: “Bow and Arrow dancer, when done in the summer. There are 3 different styles of dress. Depends on when it’s done and the purpose.”  We have handled many of Atencio’s paintings over the years but have only seen a few single figure pieces like this one.

The dancer raises a bow and a cluster of arrows in his left hand and holds a rattle in his right hand.  His coral and turquoise necklace hangs down to just above his waist, and his hair falls even further, eventually reaching its end just below the knee.  As usual, Atencio went deep into the details, paying close attention to each element and enriching the image with subtle textural work.  His color palette is bright and attractive, which is typical of his work.  This Bow and Arrow Dancer is another strong example of Atencio’s talent. The painting is signed by Gilbert Atencio and dated ‘49 in lower right.  We had the painting framed under off white and black matting, in a thin black frame.

Atencio will certainly be recognized as one of the finest pueblo painters of the second half of the 20th century—not only from San Ildefonso Pueblo, but among all pueblo painters.  His attention to detail was unparalleled. A professional medical illustrator at Los Alamos National Labs, Atencio carried his precise drawing and painting skills over to his fine art paintings.  His crisply drawn and clearly colored renderings of ceremonial and home life have, since around 1947, been favorites in many shows. Much of Atencio’s inspiration for paintings came from stories his aunts told him about their lives. His style varied from the traditional flat style done early in his career, to more realistic paintings done later in his career.  Atencio passed away in 1995 and remains highly regarded by collectors.

Condition: good condition with a few small discolorations (see below)

Provenance: this Gilbert Atencio Original Painting of Bow and Arrow Dancer is from a private Tennessee collection