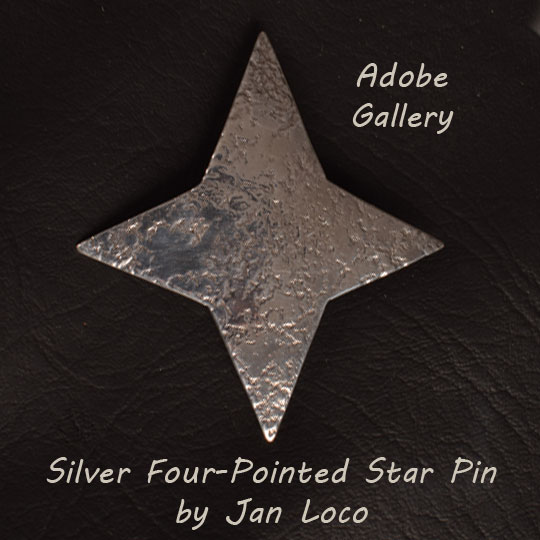 Jan Loco developed a unique and very laborious technique for achieving texture on silver.  She sometimes hammered the silver with a stone until she achieved the desired texture, or she placed the silver sheet on a stone and hammered from the back side.  In either instance, she achieved a finish to the silver that had a surface like that of a rock and would reflect light as the item was moved.

In this four-pointed star, the full face of the pin was textured without adding any additional design.  She often used what she called a Spider Woman cross in her work.  On this one, she stamped such a cross on the back along with her name for the pin “Guide Star” and her J. Loco name.

Loco had been adopted by a family at a young age and was not told of her Apache ancestry until she was an adult.  Once learning that she was the great-granddaughter of Chief Loco, one of the last of the Apache chiefs, who had been imprisoned in Florida in 1886 by the U. S. government, she delved into the history and legends of her newly found heritage.  It was then that she began making jewelry with meaningful designs related to the Apache culture.

The four-pointed star has meaning with cultures of the world.  We do not know its meaning to the Apache or any other Native tribes, but we do know that the heavens were analyzed by Native cultures with meanings being developed. This pin is a match to a pair of four-pointed star earrings on our site.  Take a look.

Provenance: the Hand Hammered Sterling Silver Four-Pointed Star Pin by Jan Loco is from the collection of an East Coast museum