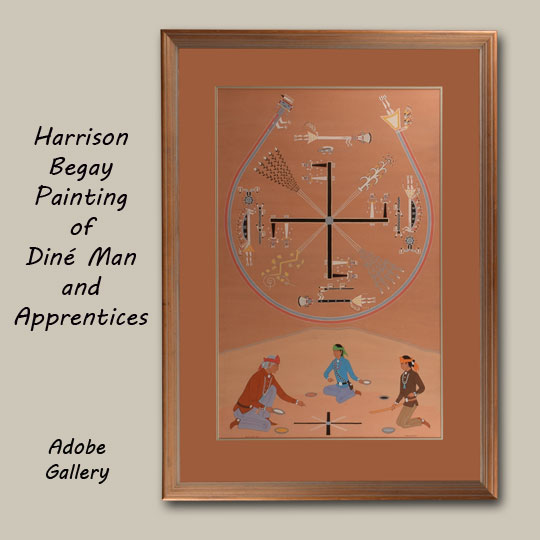 This original painting was created by influential Diné artist Harrison Begay.  It’s a large and impressive depiction of a Diné man sharing wisdom with two young apprentices.  They gather on their knees, forming a triangle.  In the center of the triangle, the man has created a sandpainting.  A line divides this portion of the image and the upper portion, which contains a detailed look at the man’s sandpainting.

The sandpainting image is remarkable.  At its center is a large black cross.  A pair of figures emerges from each end, turning the cross into a whirling log pattern.  White lines cross diagonally through the center.  From each of its ends, designs representing four significant crops appear.  These four resources are beans, squash, corn, and tobacco.  Their colors—blue, white, yellow, and black, respectively—correspond with those of the Four Directions and the Navajo creation story’s Four Worlds.  A different deity hovers near each end of the whirling log, and a single Yei figure forms a horseshoe shape around the entire design.  Begay’s work with each element of this complex design is outstanding, and the painting as a whole is quite impressive.

The painting is signed Haskay Yahne Yah in lower left and Harrison Begay in lower right.  It is framed in a carved wood frame, under two layers of matting in tones that match the painting.

Harrison Begay (1917-2012) Haskay Yahne Yah - The Wandering Boy was a world-renowned Diné (Navajo) painter who is generally regarded as one of the most successful and influential early Native American painters.  Begay studied under Dorothy Dunn at the Santa Fe Indian School in the 1930s, and then attended colleges in North Carolina and Arizona. From 1942 to 1945, he served in the US Army Signal Corps.  In 1947, Begay returned to the Navajo reservation, where he enjoyed a long and productive career as a painter. He is known to have continued painting into his 90s. Begay passed away in 2012, leaving behind a large body of work and a lasting legacy in the world of Native art.

Provenance: this Harrison Begay Painting of Diné Man and Apprentices is from a private Texas collection