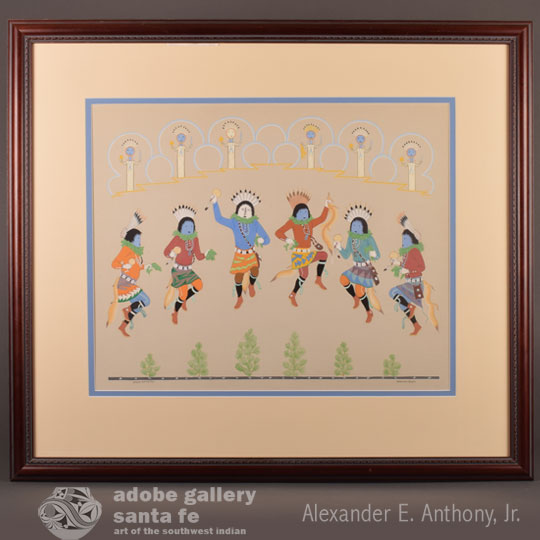 This exceptional watercolor painting suggests that influential Diné painter Harrison Begay did some of his most interesting work when focused on Navajo ceremonial imagery. This is a particularly strong piece featuring a half-dozen Diné dancers. They're intricately adorned, beautifully colored, and completed with the exceptionally detailed work that collectors expect of Begay. His color palette here is atypical, as it doesn't include the warm, soft pastels that Begay used most frequently. Instead, the viewer sees a wider-than-usual variety of colors, including bold blues and greens alongside bright and vivid oranges and reds. They're positioned in a line, creating a nice symmetrical arrangement. The dancers on the outside of the line turn in towards those on the inside; the dancers on the inside face the viewer directly. Behind them is a row of six figures, arranged similarly, among clouds and lightning. They're linked, in fact, by a single lightning bolt which crosses the sky horizontally. From this lightning bolt, each figure emerges, framed by the continuous cloud formation that circles above. In the foreground, six plants are pictured, in an arrangement similar to the dancers and gods. The manner in which the figures are positioned is simple but strong, allowing the viewer to inspect the dancers' details or just appreciate the image as a whole.

Myron Denetclaw, a talented young Diné painter with whom we work regularly, gave us detailed information about the scene: “The painting depicts the powerful imagery of Yei. The bottom two identical dancers with blue masks and eagle feather headdresses represent House God—Ha'sche'-Ho'ghan.  The top left dancer is their leader—Hache'yalti, Talking God. Right of him is water-sprinkler, Tone'nili. The black bar below their feet represents dark rain clouds with white lines symbolizing water droplets and moisture. Above the dancers in the clouds are their sandpainting imagery of themselves. The detailed bodies, arms, masks, and headdresses correctly depict the deities. This painting probably represents the House-God songs, sung in the nightway ceremony on the final night.”

The image is completed on light gray paper, and framed beautifully. It’s placed underneath two layers of matting.  There’s a thin interior mat in light blue, which matches the painting, underneath a wide off-white mat. A rich red carved wooden frame completes the presentation.  The painting is signed “Harrison Begay” in lower right, and “Haskay Yahne Yah” in lower left.

Condition: this Harrison Begay Painting of the Powerful Navajo Imagery of the Yei is in excellent condition