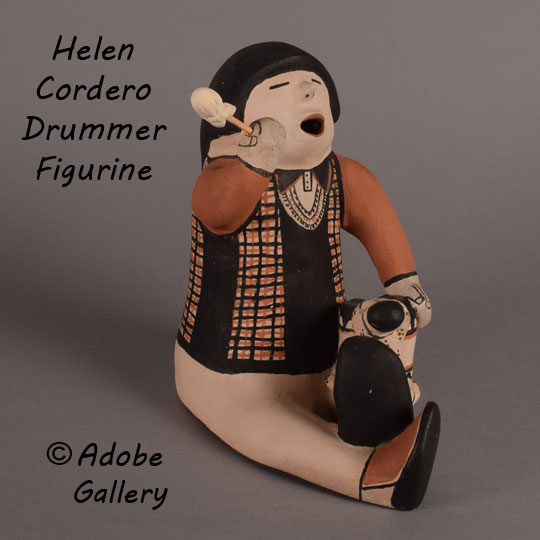 This pottery drummer figurine was created by Cochiti Pueblo artist Helen Cordero. Those who are familiar with Pueblo ceremonial dances will recognize the significance of drummers like the one depicted here. Their strong, steady rhythms carry the songs, which guide the dancers as they perform what are essentially prayers. The music relies heavily on repetition and rhythm, creating a wonderfully hypnotic effect for all in attendance. The drums themselves—made from hollowed-out logs and cured animal hides—are incredibly beautiful as well.

With this piece, Cordero created a fine depiction of a Cochiti Pueblo drummer. He sits with his legs crossed, resting his drum on his left thigh and supporting it with one hand. His right hand raises his drumstick, which is made out of wood and deer hide. With his mouth wide open and his eyes shut, he is clearly lost in song, which makes him a fine representation of an actual pueblo drummer. His perfectly formed face and intricately portrayed clothing and jewelry suggest that he was created in the 1970s, when Cordero created many of her strongest works. The black and orange pigments are a bit bolder than usual, elevating the impact to a level that matches that of the song.

The base of the piece is signed Helen Cordero, Cochiti N Mex.

Provenance: this Helen Cordero Drummer Figurine circa 1970s is from a private California collection