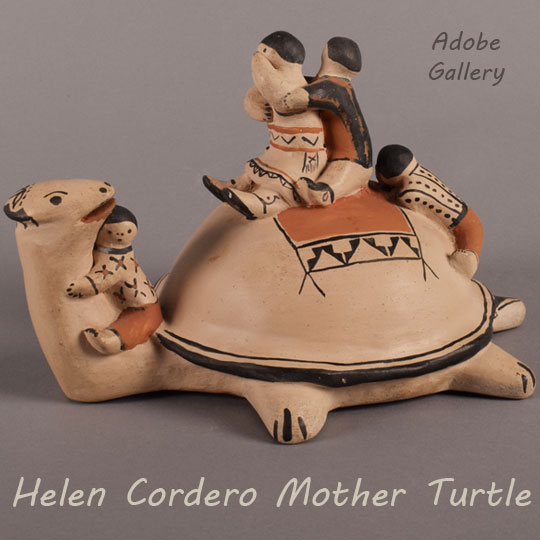 This pottery figurine was made by Helen Cordero of Cochiti Pueblo. As the inventor of the storyteller figurine, Cordero is something of a legend in the world of Native art. With this piece, she pays tribute to a Cochiti Pueblo legend in which a female or Mother Turtle comes to rescue the pueblo children in times of turmoil, danger, or flood. This was one of Cordero’s favorite subjects, but each execution is unique due to the character of the children and mother turtle herself. Individually, they are somewhat simple forms, but Cordero used expressive movements and colorful patterned clothing to give each figure its own personality.

This piece features four human children. Two sit together on a textile spread across Mother Turtle’s shell. Both are frightened; the girl covers her face as the boy behind her clings to her shoulders. In the front, another boy has wrapped himself around Mother Turtle’s neck. She looks back, making sure that the group is safe. Rounding out the procession is the only traveler who is unconcerned with whatever danger is present—he snoozes peacefully near the tail end of Mother Turtle’s shell. This is a fine example of one of Helen Cordero’s most beloved styles.

The bottom of the piece is signed Helen Cordero, Cochiti N Mex.

Helen Cordero (1915-1994) was a Cochiti Pueblo artist. Cordero, who passed away on July 24, 1994, was truly an original artist. Unable to fashion pottery vessels in a manner with which she could be satisfied, she changed her course to figurative pottery, rather than give up altogether. Cordero created the very first storyteller pottery figurine in 1964. Little did she know that she was starting a new tradition and changing the course of Pueblo pottery production.  Now, all the Pueblos make storyteller figurines—not just Cochiti Pueblo.  A storyteller made by her is to be a treasured item in any collection.  Cordero was the granddaughter of Santiago Quintana and Magdelena Quintana; daughter of Mr. Quintana and Caroline Quintana-Pecos; sister of Trinidad Herrera; wife of Fred Cordero; and mother of Dolores Peshlakai, Jimmy Cordero, Antonita "Toni" Suina, George Cordero, Leonard Trujillo.

Provenance: this Helen Cordero Mother Turtle Figurine with Four Human Children is from a private collection