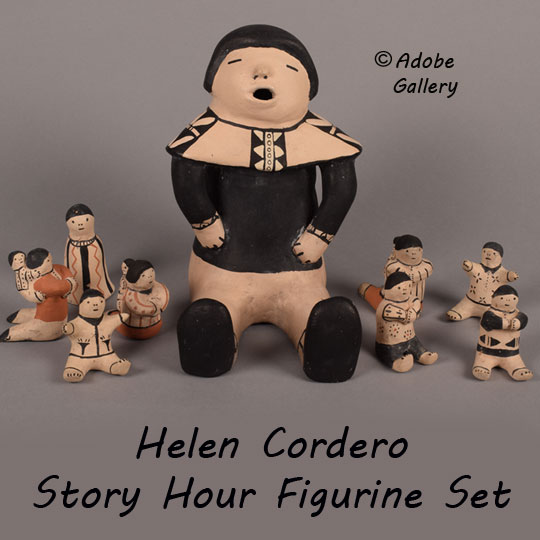 This set of figurines was created by Cochiti Pueblo artist Helen Cordero. On rare occasions, Cordero made storyteller figurines with the children sitting around the adult figure rather than adhering to the adult. She called these pieces Story Hour figurines. They are still considered storytellers, but she did designate them with this specific name. Story Hour sets rarely appear on today's market.

This exceptional example of the Story Hour figurine set was made in the 1980s. The primary figure is a pueblo man. He's painted not with the typical orange and black, but only with black—an interesting choice that works well with this figure. He is depicted in the usual position, but without children clinging to his body, of course.

An additional eight figurines are included, which allows the viewer some level of interaction with the piece as they select an arrangement. Four of these figurines are close to what we'd see on a typical storyteller piece; most are completed in black like the primary figure, but one has small spots of orange in his patterned shirt. Three figurines depict parents carrying infants on their backs, and one unique robed figure appears. This set of figurines is an extraordinarily rare example of Helen Cordero's work. Helen Cordero (1915-1994) was an influential Cochiti Pueblo potter. Cordero lived her entire life at the pueblo, where she married artist and Cochiti governor Fred Cordero. Cordero was the inventor of the storyteller figurine, but the path to that discovery was not easy. Cordero initially worked with leather and attempted to make pottery bowls and jars. Her aunt suggested she explore figurines because her traditional vessels were misshapen. The storyteller has become a significant motif in the world of Native art, and Cordero's pieces are widely considered to be the most sought-after examples.

Condition: very good condition, one leg on the large figurine was broken and then repaired by a professional restoration artist