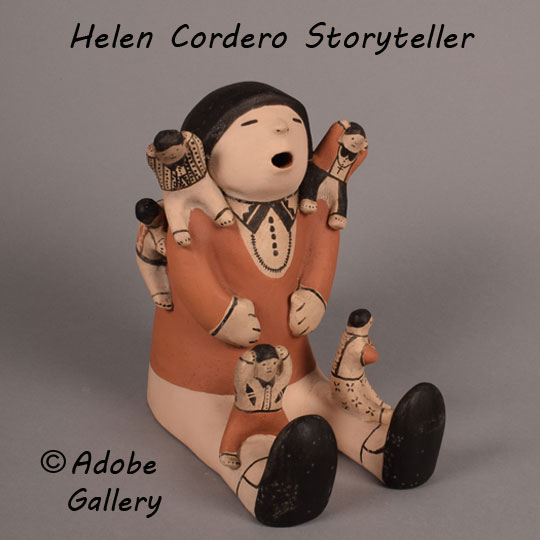 This storyteller figurine was created by Helen Cordero of Cochiti Pueblo. The primary figure is the typical seated male with closed eyes and an open mouth to indicate he is telling a story. He wears an orange collared shirt and a necklace, which hangs down to just below a row of buttons. Moccasins with black soles cover his feet. A total of six children appear, with one on each leg, one on each shoulder, and a pair clinging to the man's back. Each child wears a unique outfit, and some appear to be covering their ears.

There is nothing elaborate or complicated about this piece; rather, it is simple and strong. The pottery figurine likely dates to the 1980s, when Cordero began making her figures a bit thicker than she did in her earlier era. Careful attention was devoted to the areas that call for it, but the impression of the piece as a whole seems to have been the artist's primary focus. This is a fine example of Helen Cordero's 1980s work.

The bottom of the piece is signed Helen Cordero, Cochiti N.M.

Helen Cordero (1915-1994) was an influential Cochiti Pueblo potter. In 1964, Cordero created a depiction in clay of an open-mouthed male with numerous children clinging to his body. It was a tribute to both her grandfather and her people's history of oral tradition. This style would come to be known as the "storyteller," and it would become incredibly popular with countless artists and collectors. As the inventor of the style, Cordero created the storytellers that are considered to be the most desirable today. Cordero passed away in 1994, leaving behind a large body of work and a significant legacy.

Condition: A leg has been broken and repaired. Small spots of some sort of material have accumulated in certain areas, most noticeably over the black pigments.

Provenance: this Storyteller Figurine with Six Children ca. 1980s is from a private California collection