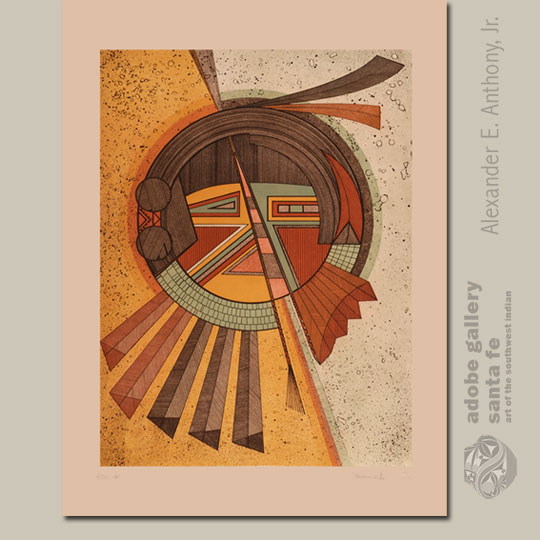 Among the strongest and most sought-after work by Santa Clara Pueblo artist Helen Hardin (1943-1984)  is a series of three exceptional aquatint etchings. “Changing Woman,” “Medicine Woman” and “Listening Woman” comprise what is commonly referred to as Hardin’s “Woman Series.”  Hardin, the daughter of influential Santa Clara Pueblo artist Pablita Velarde, was primarily known as a painter. In 1979, art dealer Sue Di Maio began encouraging Hardin to explore printmaking.  Hardin’s contemporaries—Fritz Scholder and R.C. Gorman, most notably—had been creating lithographs successfully for years, but she believed these artists’ prints to be inferior to their paintings.  Hardin begrudgingly attended a meeting with Richard Ximenez, master printer and operator of El Cerro Graphics in Los Lunas, New Mexico. After a lengthy meeting regarding technical details and the receipt of a persuasive follow-up letter, Hardin agreed to go to work with Ximenes.  She found herself to be well-suited to the medium and, after her earliest efforts were successes, began to enjoy it. She created and released 23 etchings in total, all during the last four years of her life.

A year after creating “Changing Woman,” the first of the series, Hardin created this piece: “Medicine Woman.”  The four-color etching was inspired in part by a previously completed Kachina painting. During its creation, Hardin was diagnosed with breast cancer and a mastectomy was ordered. “It was almost as if I needed that person, that healing spirit,” Hardin said. “After I found out I had cancer, and we were doing the print at El Cerro, I felt I had her spirit with me.”  That spirit is most evident in the image—it’s subtle but powerful, undoubtedly one of the artist’s most affecting images. We are always pleased to be able to offer any of the “Woman Series” etchings.

Hardin’s WOMAN SERIES etchings have come to be regarded as some of the artist’s strongest and most significant works. Jay Scott described the images adeptly: “...they are icons of the constancy of change, the timelessness of grief and the virtue of endurance. They are hymns to stoicism. The colors in all three—muted ochre, mustard, burnt umber, faded tangerine, bleached turquoise and charcoal—are masterfully orchestrated and harmonized; the emphasis is not on surfaces, but on interiors and essences.”

This “Medicine Woman” etching is number 26 of 65. The etching is signed, numbered, and marked with the chop marks of the printer and print shop.  Official documentation of the print record, which details printing techniques and materials, is included with the etching.