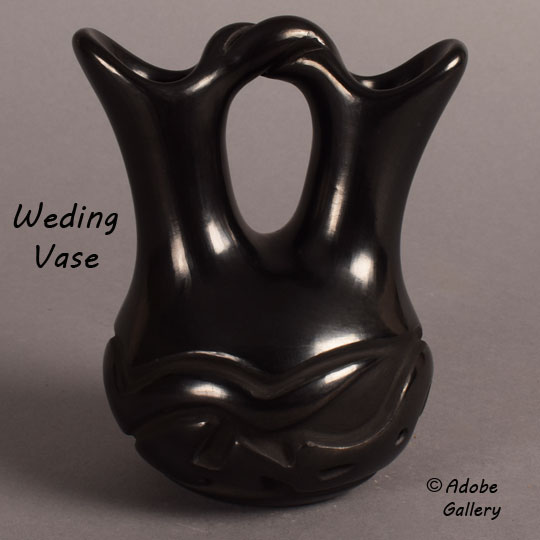 Helen Shupla of Santa Clara Pueblo made this gorgeous blackware wedding vase. Shupla carved an Avanyu into the surface of this vessel, and her work with this figure is excellent. Her carving is precise and consistent, which suits the character of the vessel as a whole. This is a smaller example of a wedding vase, and each element feels perfectly balanced with the others. The exterior is highly polished to a smooth, glassy sheen, which also feels appropriate for a vessel that is so strong on a technical level. This piece is as close to perfect as one could reasonably expect of a coil-built, traditionally fired piece of pottery. Shupla is well known by collectors for her ribbed melon jars, which are consistently stylish and well executed. Here, she translates those skills to a different form, offering a small wedding vase that has a similar appeal to her preferred form. We have handled a few wedding vases by Shupla over the years. Some have used the ribbed wall style of her melon jars, and others present traditional symbolic imagery. This example falls into the latter category.

The bottom of the vase is signed Helen Shupla, Santa Clara Pueblo.

Artist Helen Shupla (1928-1985) was of Santa Clara Pueblo and Tohono O'odham (Papago) heritage. She was active as a potter from around the mid-1940s until her death. Her husband, Kenneth Shupla, was a Hopi carver who moved to Santa Clara when he married. It is traditional for the husband to move to the wife's village. Their daughter married Alton Komalestewa, also a Hopi. He was mentored as a potter by Helen and began making melon jars in her style. Shupla's works are highly sought by today's collectors, and she received many notable awards and accolades for her work.

Reference: Talking With the Clay: The Art of Pueblo Pottery by Stephen Trimble Talking with the Clay: The Art of Pueblo Pottery [Hardcover] [SOLD]
by Stephen Trimble