Historic Polychrome Zuni Pueblo Pottery Jar with Evidence of Use 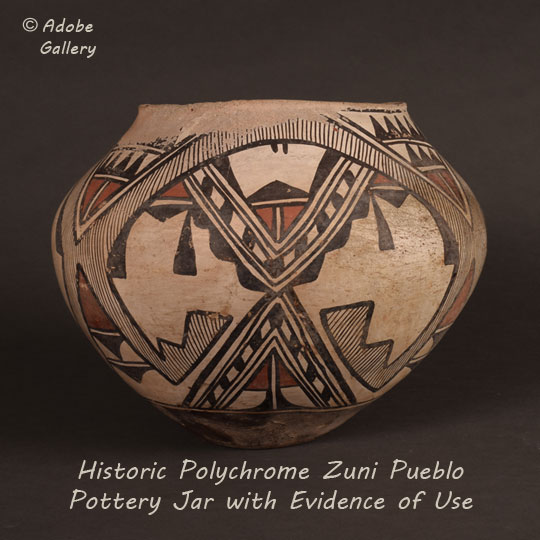 This polychrome Zuni Pueblo jar most likely dates to between 1910 and 1920. It exhibits significant wear from use in the form of slip abrasions around the rim and a pair of vertical cracks. The cracks have been stabilized by a professional restoration artist, but we chose to leave them visible along with the slip abrasions because we appreciate the look and feel of a well-used jar.

The vessel has an appealing shape, with softly rounded curves and a wide rim. Some might suggest that the shape is a bit less distinctively Zuni than the typical example from this period. The vessel shape certainly could emerge from a number of pueblos, but the wonderful designs and the clay itself could come from nowhere else.

The designs seen here appear in nearly identical forms on both a recently listed piece [Historic Zuni Pueblo Polychrome OLLA with X-Shaped Design] and a jar pictured in Lanmon and Harlow's The Pottery of Zuni Pueblo (p. 438). According to Lanmon and Harlow, these designs do not appear on any of the many pieces that were documented between 1870 and 1912. These designs likely appeared shortly thereafter at the very earliest, and almost always are seen on jars that are skillfully crafted and painted. Judging by the look and feel of this piece, we would say that it's most likely one of the earlier examples of pottery made with this particular design. The exact details will remain unknown, as is often the case with historic pieces like this one, but we are delighted to come across two examples of this striking design in a short period of time.

Condition: wear from use, mostly around the rim. Two vertical cracks, which have been stabilized but not concealed