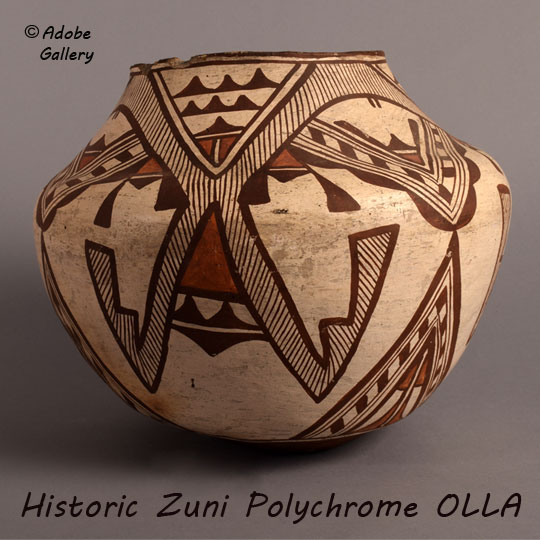 This polychrome OLLA was created by an unknown Zuni Pueblo potter. We'd date it to the early 1900s. It appears as though the base couldn't quite hold its form as intended during the creation of the pot, resulting in a vessel that leans a bit to one side. It's not uncommon to see this in pieces that were made for use, but it's worth pointing out, as some collectors prefer perfect symmetry while others appreciate a character-enhancing "happy accident."

The potter covered the majority of the jar with a single design band, leaving just a couple inches of dark red at the base. A triangular form surrounds the top of the pot, with each long side bending inward to touch the rim. Instead of ending and forming vertices, each line continues through the intersecting line, forming three large X shapes. A pattern of nearly vertical lines fills in this primary motif. V-shaped forms emerge from the areas in which the primary design bends up toward the rim. These secondary elements reach down to the shoulder, where they meet the additional V shapes that reach up from the bottom. Those who appreciate traditional symbology will notice rain, lightning, and cloud motifs within these larger forms. This is a unique piece with plenty of character and an excellent design.

According to Harlow and Lanmon in the referenced book, ". . . jars with this pattern were not included in any of the pottery collected at Zuni by the Stevensons in the late 1870s and 1880s; nor does the pattern appear in any of the pottery or photographs of pottery collected at Zuni by George Pepper for the AMNH (American Museum of Natural History) in 1903 or by Dr. H. J. Spinden in 1911-12. This suggests that it was a design innovation made in the 1910s at the earliest." Harlow & Lanmon 2008:438

A photograph taken at the Gallup Inter-tribal Indian Ceremonial in circa 1935 of ten Zuni OLLA maidens with pottery on their heads clearly shows three jars with this same pattern. It is difficult to determine if the jars were older or newer at the time of the photograph.

Condition: very good condition for its age, with a few small rim chips. Examination under a blacklight shows no evidence of repair or restoration.  This jar does have a slight tilt to it which is expected in a pottery jar of this vintage.