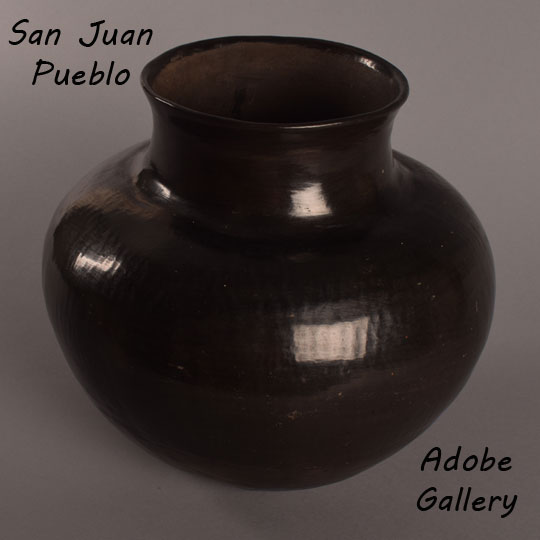 When this San Juan Pueblo historic pottery jar was in the formative stages, with coils of clay being stacked row upon row, and the clay was still moist, it is likely that the weight of the jar as it got taller, resulted in a tilt to one side.  This is not an uncommon occurrence.

The finished clay body, after being smoothed with a gourd or other scraper, and possibly sanded or rubbed with a moist cloth, was partially covered in a dark red clay slip, which was meticulously stone polished with up and down and sideways strokes.  The red slip was applied over the upper 2/3rd of the jar, with the lower 1/3rd left in the natural state.  One often questions why potters would leave the lower part without slip application, but this is traditional at all the Tewa-speaking pueblos of northern New Mexico.  It is generally unquestioned on polychrome jars as it has become customary to see a tan-color lower body below the painted design.  The concept of San Juan pottery is the same— it only seems unusual until compared with the tradition at all Tewa pueblos.

The jar was fired in a reduction firing which left the unslipped tan area in a gray color and the red slipped area in a beautiful burnished black color.  This is the historically traditional style of pottery at this pueblo, until a change in 1935 for modern buyer’s tastes.  The pueblo has returned to its traditional name of Ohkay Owingeh, but the pottery styles have retained the modern Spanish name of San Juan Pueblo.

The jar has a flat bottom, an indication that it was not made for pueblo use.  Traditionally, the underbody would be concave if intended to hold water and be carried on the head of a person.  It is estimated that the date of the jar is circa 1920s, near the end of the period of this style.  In 1935, potters at the pueblo developed a pottery style more similar to that of Santa Clara Pueblo in an attempt to attract the interest of buyers.  The older style, as is this jar, was reserved for pueblo use.

Provenance: this Historic San Juan Pueblo Polished Black Pottery Jar c.1920 is from the collection of a client from Kansas