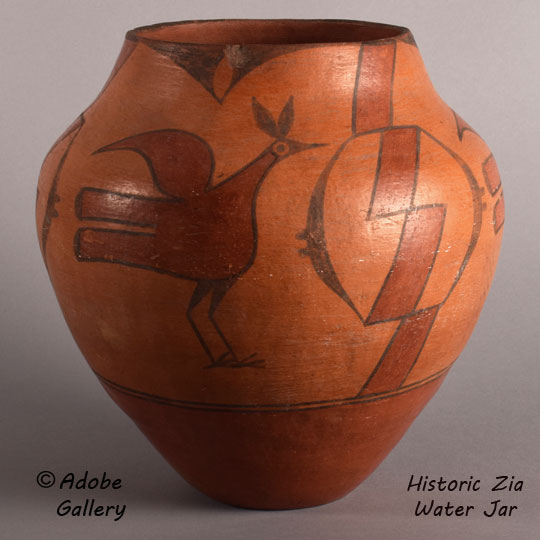 This circa 1920s water jar from Zia Pueblo defies its age due to its lack of traditional historic Zia Pueblo pottery designs covering most of the vessel surface.  The potter chose to highlight her design with three Zia birds that are traditional in design.  Each bird was rendered in red slip and outlined in black.

Separating the birds is a design that resembles the Zia Sun symbol, with a pair of horizontal lines suggesting the Sun symbol.  Running vertically through these are stacked parallelograms, slightly tilting and off center.  They were executed in orange slip and outlined in black.  These vertical dividers are unique.  I do not recall seeing this combination used before.

These unique designs should be clues to identifying the potter, but I could find no published examples that were like this one, so she will remain unknown.

The slip on the body of the jar is orange in color. According to Lanmon and Harlow, “Starting in the early 1920s, Zia potters began experimenting with a new overall slip color for their pottery.  The surface is usually a strong orange-tan, on which designs in black and red are applied in patterns characteristic of the time, some incorporating traditional elements, some with distinctive new features.” [Harlow & Lanmon,2003:174]  Also in that publication, the authors mention that “the main period for the orange-tan slip is in the 1920s.”

The red slip on the underbody and on the birds and parallelograms was stone polished, but that on the inner rim was left in a matte state.  There is no “wiped-on” red band on the polished lower body, a practice abandoned by 1930.

Here we have a decidedly modern approach to a Zia jar that is otherwise traditional in all aspects of manufacture.  The potter beautifully displayed her love of minimal design and open space.  She achieved a remarkable result.  This is an extraordinary work of art.

Provenance: this Historic Zia Pueblo Orange Slip Pottery Jar with Birds is from the collection of a family from New Mexico