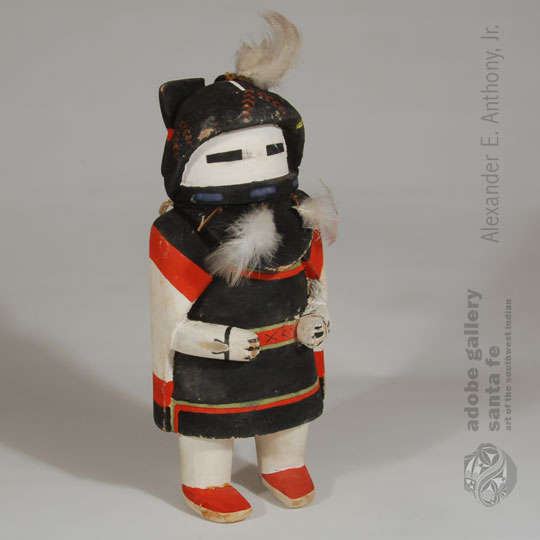 Barton Wright states that Alo Mana is the same katsina as Köcha Mana who accompanies the Angak’china Katsina.  The only difference is what each carry in its hands.  Alo Mana wears a horsehair beard with white down feathers attached.  Köcha Mana wears a feather beard but those are the only visible differences.  The Angak’china is known as the Long-haired Katsina and his beard is like the one on Alo Mana.

These katsinam appear in a group and the male sing very melodious songs which may be one of the reasons that they are such favorite katsinas.  The purpose, of course, is to bring rain.

This version of Alo Mana appears to date from the early 1940s, based on the matte paints and the position of her arms pressed against her body.  Her hair is put up in the form of young Hopi maidens, an indication that she represents an unmarried female.

Condition:  very good condition.  The right foot has been broken and glued.  One feather on her beard is missing.  Very minor paint loss.

Provenance: this Hopi Alo Mana Katsina Doll from the collection of a family from Santa Fe 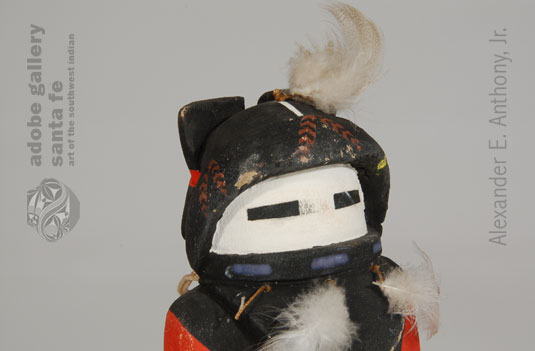