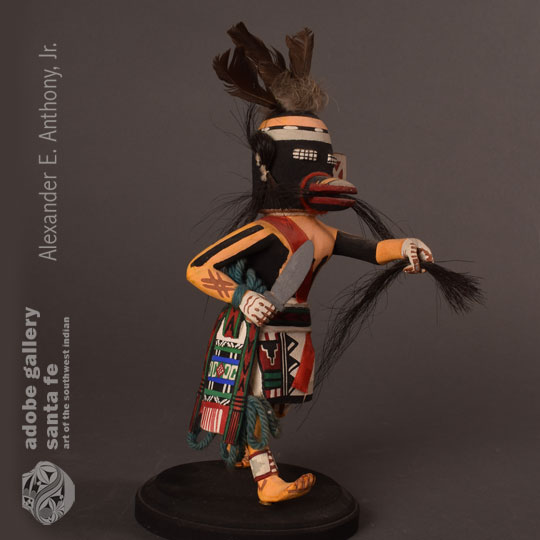 This Hopi Pueblo katsina is a Runner Katsina and one of the very few Runners who consistently appear in elaborate costuming. Normally, Runners wear very little clothing, to facilitate speed in running. He appears on all three Mesas and his action is to catch another katsina and cut off a lock of his hair.

Most of the dances that are given in the plaza in late spring are accompanied by additional katsinas who may not be dancers.  Often a group of katsinas known as Wawarus Katsinas or runners will appear and run races with the men and boys of the village.  They come in the late spring, either as a group or as individuals, during a pause in a Mixed or Plaza Dance. Usually they will select one end of the Plaza and, assembling there, will endeavor to have an individual race.  If there are many Wawarus, there will be a great churning about with one or another racing down the length of the Plaza and others prancing up and down to ready themselves for the coming contest.

Quite often they will lure some unwary clown into racing and will immediately catch the hapless individual and perpetrate their peculiar form of punishment on him. They quickly tire of this and will gesture or hold up a reward to some young man in the crowd of bystanders. If he accepts, they will allow him about ten feet of space in which he can move about as he pleases.  But the minute he leaves that area he runs as if unpleasant disaster were behind him, and it usually is, for some of the punishments are quite unpleasant.

This katsina, the Hemsona, is the “hair hungry” katsina and one who races with a pair of sheep shears, scissors, or knife in one hand.  Upon overtaking the challenger, he will fling him to the ground and cut off his hair knot or snip off only a token lock as he sees fit.

This 1950s carving of Hemsona is in the running position and already has hair from one victim in his mouth and another bunch of hair in his hand.  His knife is at the ready for another encounter. Other Runners or Racers are Hototöm, who appear to challenge the village men and boys to footraces, a blessing for strong and healthy life; Patsootskatsina or Cockleburr katsina who rubs several cockleburs into the hair of his opponents when he catches them; Nana’tsuvsikyavo who does not boast about his strength, but always wins; and Navantsitsiklawqa, who tears his opponents’ shirts when he catches them.

Condition:  this Hopi Pueblo Hemsona, He Cuts Your Hair Katsina Doll is in very good condition.

Provenance: from the extensive katsina doll collection of a family from Oklahoma