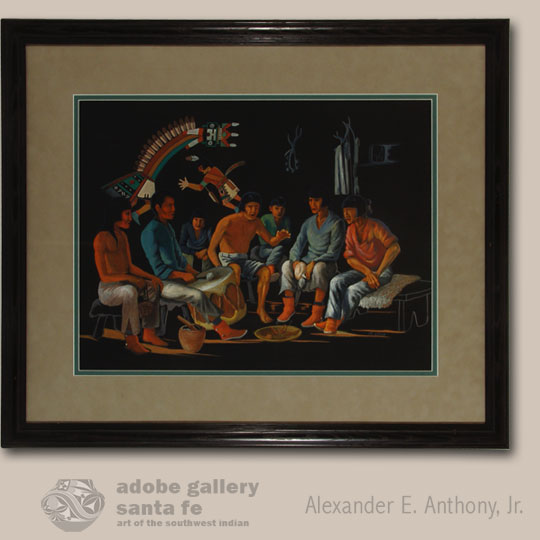 When one visits the Hopi villages to witness a Katsina Dance in the plaza, it is generally the culmination of a 9-day ceremony that has been secretly on-going in the kiva and not open to the public. This is a kiva scene pictured by Raymond Naha (1933-1975). A drummer is beating his drum and a chanter is singing.  The young men sitting around are probably initiates.  There is a bowl and ladle next to the drummer that probably contains sacred cornmeal or other medicine.  The basket on the floor appears to hold smoking pipes and a feather.  On the kiva wall is painted a Rainbow Man and a Hopi boy.  Other items hang on the wall.

Hopi-Tewa artist Raymond Naha was born in the village of Polacca, which is at the foot of First Mesa, on the Hopi Reservation in Arizona on December 5, 1933. He studied under Fred Kabotie at Oraibi High School. Kabotie recognized Naha's talent and encouraged him to continue his studies. Naha then took correspondence courses and studied at the Phoenix Indian School, which was the end of his formal art education.  His progress from then was purely self-motivated.

Dorothy Dunn devoted a paragraph to Naha in her book on her students. She said:

“Raymond Naha is developing resourceful methods in using light and shade to dramatize Hopi ceremonials and dancers. He illuminates scenes in the striking contrasts of a particularly strong palette. Native conventions, however, underlie his painting even though it stands out as daringly different from that of the traditional Hopi school. He received the Indian Arts Fund Award in 1962.”

Clara Lee Tanner devoted several pages on Naha in her book referenced below.  She refers to his "great natural talent."  She states that Hopi and Zuni Katsinas were a favored subject of his and that they serve as fine ethnological studies from the masks to costume, jewelry, paraphernalia carried by the dancer, and body paint.  She praised him for accuracy of color depiction and good body proportions.

Naha painted this on black paper and used soft pastel colors for the men’s clothing. The colors, although pastel, are almost luminescent.  The images are so realistic that one feels part of the group, silently listening to the drum and chanter. 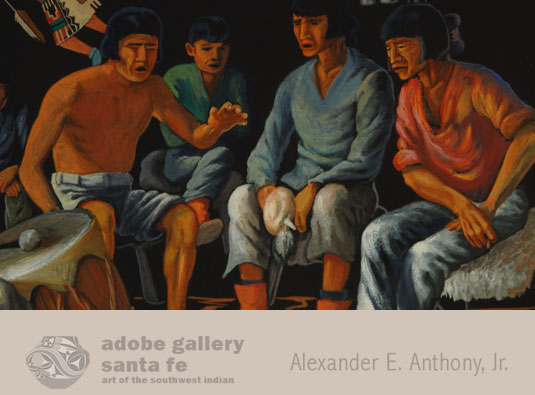