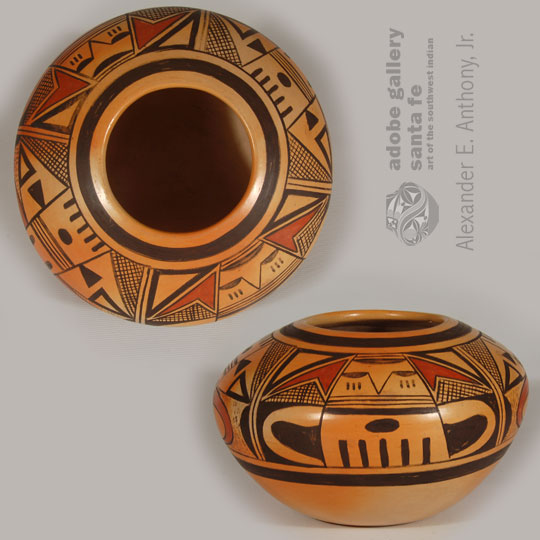 Nampeyo of Hano was probably the first Hopi-Tewa potter to paint Katsina imagery on 20th century pottery.  It is not unexpected, then, that her daughter, Fannie, would follow her mom’s tradition.  Fannie Polacca Nampeyo (1900-1987) was one of three daughters of Nampeyo and Lesou and the last of the three to pass away. It is for this reason that most collectors are familiar with her as she was actively making pottery in the mid- 20th century during the increase in popularity of Native American Pottery by collectors.

The imagery on this jar appears to be the face of a katsina.  The five vertical lines at the bottom of the face probably represent a beard like that of the Long Hair Katsina.  The parallel lines under the eyes could represent warrior marks. Probably, it is not a specific katsina, but meant to represent the medium. 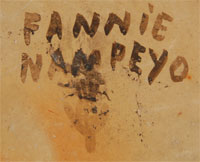 This jar has a warm gold patina from its many years of existence.  The yellow color of the clay has mellowed as has the red used in the design.  Often, the dark brown mineral paint rubs off on Hopi pottery so that is to be expected.  Later in her career, Fannie would rub Vaseline on her pottery and polish it with nylon. I do not know if she did that as early as this jar seems to be but perhaps that is why the patina is so wonderful and the paint has survived so long.

Provenance: this Hopi Polychrome Jar with Katsina Imagery is from the collection of a Santa Fe family 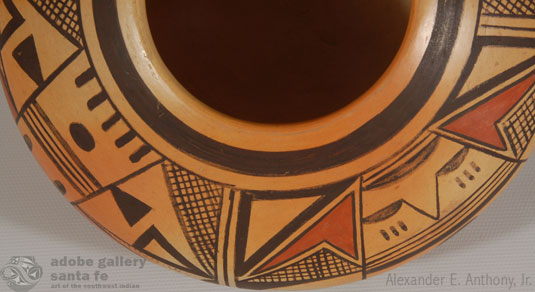