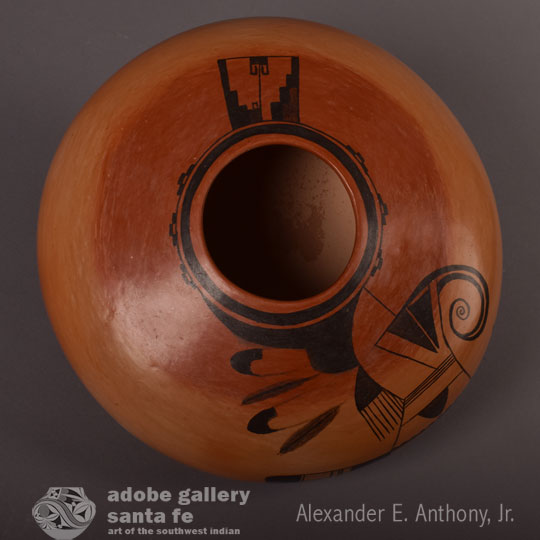 This two-tone Hopi-Tewa pottery jar by artist Priscilla Namingha Nampeyo is most unusual in color and design.  At first glance, it would appear that Priscilla wiped a red slip over the yellow body of the jar to obtain the two-tone effect.  That is not correct, however, as explained by two of Priscilla’s daughters when they saw the jar at the gallery. They said that their mom had used two different clays in the construction—the grey clay and the yellow clay that are normally used when making the two different styles of Hopi-Tewa pottery that result in a yellow appearance from one clay and a red appearance with the other clay.

The other most unusual and strikingly beautiful aspect of the jar is the painted design of a very large and commanding stylized bird.  The body of the bird is dressed in an embroidered manta. From the body, there are three horizontal feathers. On seeing that portion of the design, one of Priscilla’s daughters commented on the “eye” in the dark brown section. The design around the bird’s feet will have to remain a mystery as I do not know Priscilla’s intent.  It almost looks to be a textile.

The head has an elaborate spiral beak,  a pair of outlined feathers and a pair of realistic feathers.  Behind the bird’s head is a rain cloud and rain, signifying, perhaps, that this is a “rain bird.”  There is a single brown spot below the bird’s beak. This is not an accident but was certainly intentional by the painter as there is another one below the bird’s tail feathers. On the opposite side of the jar is a small square with stepped designs, reminiscent of a man’s loincloth.

The jar is a masterpiece of construction and artistic achievement, illustrating Priscilla Namingha Nampeyo’s (1924-2008) genius as a potter and painter.  It was especially rewarding to have two of her daughters hold the jar, rub the surface and comment on the construction and design. It illustrated their appreciation for and respect of the jar as a living manifestation of their mom.

Provenance:  from the collection of a resident of Florida