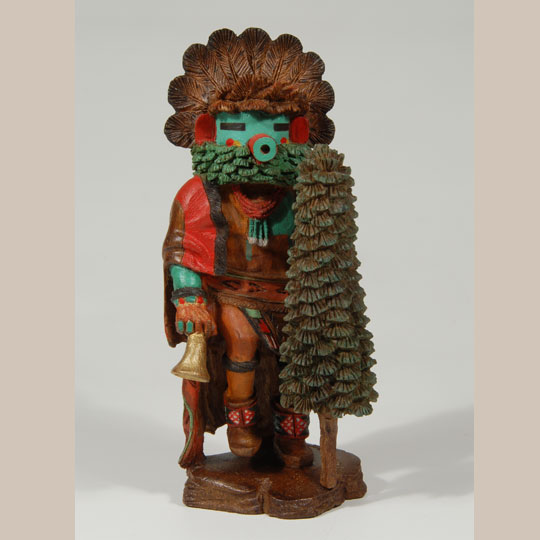 Kevin Pochoema surprised me when he walked into the gallery in February 2015 with this Morning (Talavai) katsina doll because I had not seen him in over 15 years.  I used to visit him on the Hopi Reservation in an attempt to purchase katsina dolls from him because I always thought he was probably the best carver on the reservation.  I never succeeded in getting any dolls from him because a dealer from Taos at that time purchased everything he carved. Now that Taos dealer is no longer in business, so we have been getting more carvings from him.

We sold this katsina doll shortly after acquiring it from Kevin and now we have it back to sell again because of family financial problems of the purchaser.  I am pleased to have this Morning Katsina back again because it is one of my favorite katsinas.

This carving is absolutely magnificent.  The snout and tree were carved separately and added to the basic one-piece carving.  Even the bell in his right hand was carved as part of the hand. The detail of each branch of the tree, the neck ruff of the katsina, and the feathers on his head and on the back of the head are amazingly detailed.  The natural grain of the wood was left visible on parts of the carving as contrast to the painted sections. The katsina doll is an absolute jewel of perfection.

According to Barton Wright, the Talavai (Morning) Katsina formerly appeared in pairs on the rooftops and sang songs, waking the people in the village. During the day they would dance with the other katsinas that they led and prompted in the singing. This role is no longer used in any of the villages. They still appear with the other katsinas in the Powamu Ceremony and are most often standing in a set to one side of the main movement of the procession.

Provenance: purchased by the gallery from the artist in February 2015, sold immediately to a family in New York, and now have it back from that family for sale again.