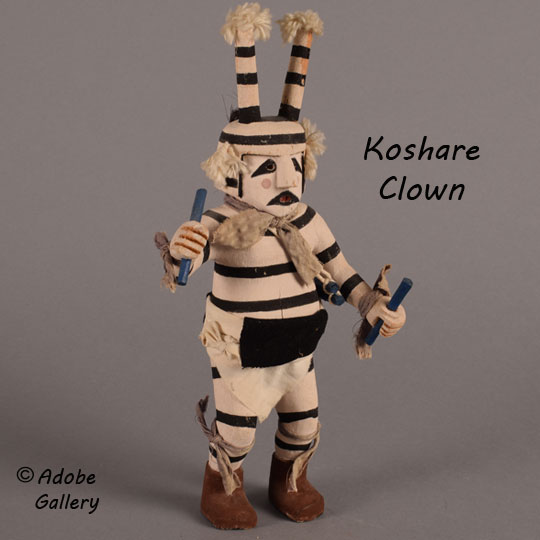 This Koshare carving was created by a Hopi Pueblo artist. The Koshare is probably one of the best-known Hopi clowns, however, his origins are actually from Tewa Pueblos. The Koshare most likely arrived at Hopi with the pueblo immigrants following the Pueblo Revolt, when they were given a village atop First Mesa, which is known as Hano Village. They live there today and still speak the Tewa language, but they have also adopted the Hopi language. The Koshare has been adopted by Hopi so exclusively that he is now seen at all the Hopi villages and has a Hopi name.

The New Mexico Tewa people call this clown Koosa, not Koshare. The avowed purpose of these clowns is to amuse, but their humor is concerned with what is not an accepted way of life for the Hopi. During a plaza event, the clowns pantomime things that are not acceptable behavior. Gluttony, for instance, is one of the things they pantomime and, in doing so, point out to the Hopi that gluttony is wrong. The pantomime is usually so humorous that the audience goes into hysterical laughter.

This Koshare is an impressive work of art. He was intricately adorned using a variety of materials, including fabric and string. The carving was executed with skill and precision. He stands comfortably but could also be hung from the wall in the way one would display a traditional katsina. While we can't say with certainty, we would date the piece to the 1950s.

Provenance: this Hopi Pueblo Intricately Adorned Koshare Clown is from a private collection