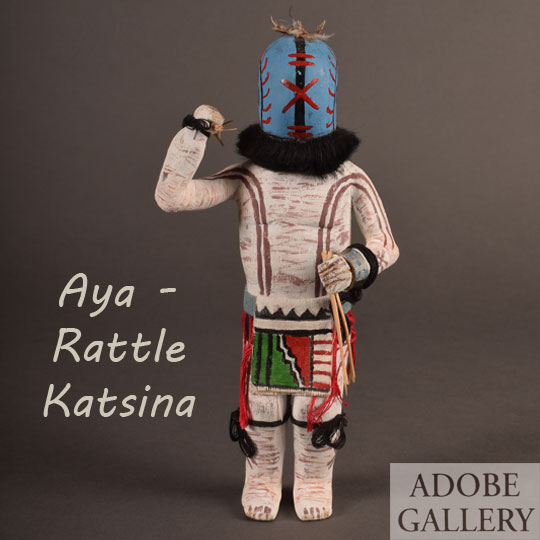 This Hopi Pueblo Aya Katsina doll is also known as the Rattle Katsina. He carries yucca whips in both hands which will be used on an unfortunate loser of a foot race. His painted loincloth, red skirt, black neck ruff and black arm and leg ties were added to the all-wood carving. He was carved with good body proportions and painted appropriately with fine detail and appears to date to the mid-twentieth century.

Many types of katsinas carry a rattle, called aaya or aya, in one hand when they participate in a plaza dance. The rattle is made from a dried, painted gourd and filled with pebbles or dry corn kernels and then fitted with a wooden handle.  It makes a clattering sound as it is shaken.

Aya Katsina is a katsina whose head looks like the brightly painted rattles that are among the gifts given by katsinas to children at Powamu and Niman ceremonies. The head of the Aya Katsina resembles the painted design found on gourd rattles.

These katsinas may appear in a line dance or a mixed dance, but usually appear as one of the several runner katsinas in the spring races when the runner katsinas come to the village plaza to challenge men and boys to races. Whether he loses or wins the race, the man who has been challenged receives a gift, usually food, from the katsina he races. If he loses, however, he also receives a punishment as well. The victorious runner katsina, holding two yucca whips in his hands, metes out punishment by whipping the unfortunate loser of the race. Awareness of the possibility of a whipping gives greater motivation to the runners.

Condition: this Brightly Painted Hopi Pueblo Aya - Rattle Katsina Doll is in very good condition.  It is possible that the feet have been repaired.