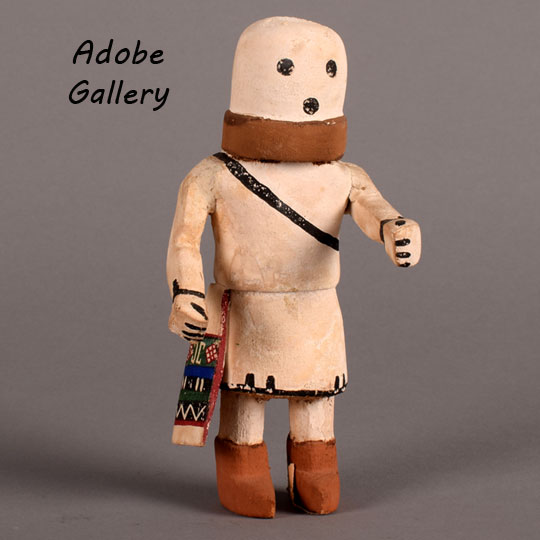 This all-wood, hand-carved version of the Hopi Eototo katsina is an excellent representation of this extremely important personage.  He wears a white case mask and, around his neck, a Douglas fir ruff.  He wears a white shirt and kilt, an embroidered sash, and a hank of yarn over one shoulder.  He wears white knitted leggings, and red moccasins.

According to Barton Wright, “One of the kachinas that appears each year is Eototo.  On each of the three mesas he is the spiritual counterpart of the Village Chief and, as such, is called the ‘father’ of the kachinas.  He is the chief of all kachinas and knows every ceremony.  As father or chief of the kachinas he appears in all major ceremonies.  At Third Mesa during the Powamu, Eototo and Aholi come out of the Chief Kiva.  Eototo always leads, and he draws cornmeal symbols of clouds on the ground.  Aholi places his staff on the symbol and waves it in an all-encompassing fashion while giving a long call.  This performance is the blessing of the village and marking it so that the clouds will come to the pueblo.

A ceremonially prepared hole in the plaza is marked with cornmeal lines leading to it for the clouds to follow, and then water is poured into the hole which represents the two cisterns.  The water is from Eototo’s gourd of sacred water (mimetic magic to induce a desired occurrence).

Arriving at the Powamu Kiva where the Crow Mother awaits, Eototo again draws lines leading to the hatchway from the different directions and then pours water from his gourd into the hatchway where it is caught in a basin by the Powamu Kiva Chief below.  At each blessing Eototo is given prayer feathers and the kiva chief takes some of the corn sprouts that he carries under his arm.  Aholi faithfully repeats each action.  Again, these actions are to bring water to the village and its growing crops, symbolized by the bean sprouts in the kiva.  The role that Eototo plays in each ceremony is complex and is only most briefly summarized here.”  [Wright, 1973:18]

Provenance: this Hopi Pueblo Hand Carved Eototo Katsina Doll is from the collection of a gentleman from California