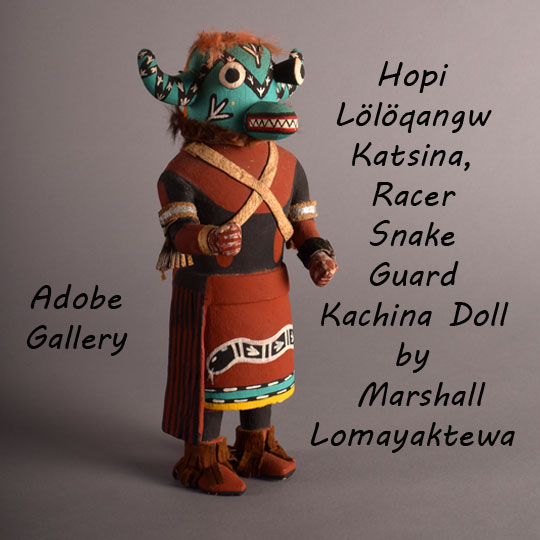 This doll was somewhat a mystery to me because of the different identifications from previous sources.  There is a paper tag from Hopi Arts & Crafts, 2nd Mesa, that identifies this as a Whipper Kachina.  Someone, at a later time, wrote “snake” on the tag.  The consignor identified it as Ho’ote Katsina.  Checking with a knowledgeable friend in Albuquerque, I was told he is a Lölöqangw (Racer Snake Guard) Katsina Doll.

I then consulted all my reference books for such a doll and found it mentioned only in Barton Wright’s book Hopi Kachinas The Complete Guide to Collecting Kachina Dolls (on page 121) in which he states it is a “Racer Snake Kachina.”  The photo in Wright’s book differs from this doll but perhaps there are variances at the different villages.

Wright states “This Kachina represents the slender desert snake called the racer.  Its movements are rapid when it appears as a guard in the Powamu procession. Lölökong stands stamping in one place and then in a flash is some distance away to begin stamping again.”

One can only assume that the katsina is not often carved.  If it had been frequently carved in the past 100 years, it would have been published in one of the many books during that time.

The carver of this doll provided us with a beautiful rendition of the katsina.  The body proportions, arm lengths, and mask scale are all good proportions.  The kilt simulates leather, and the design is of a snake. He wears leather armbands, wears a bracelet, and has leather fringe on his moccasins.  The doll is not signed with the name of the maker, but the shop tag identifies him by name.  I could not find the artist listed in any reference books.

Condition: very good condition.  Most feathers have been removed in accordance with federal regulations.

Provenance: this Hopi Lölöqangw Katsina, Racer Snake Guard Kachina Doll by Marshall Lomayaktewa is from the collection of a gentleman from California