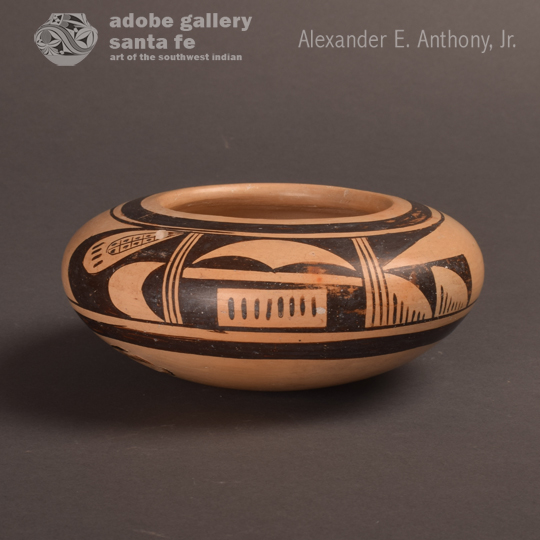 Nellie Nampeyo was one of three daughters of Nampeyo and Lesso.  She was between the oldest daughter, Annie, and the youngest, Fannie.  She too was a potter and she lived to be 82 years old. Nellie was taken to the Grand Canyon, when just a child, when her mother was convinced to spend the summer there at the newly constructed "Hopi House" built by the Fred Harvey Company. Nampeyo was there to demonstrate pottery making for tourists but the whole family was intended to show the way the Hopi lived.

In 1910, the business community in Chicago sponsored a United States Land and Irrigation Exposition in the Chicago Coliseum to draw attention to modern machinery as contrasted to what was considered primitive techniques of native cultures.  Ever aware of an opportunity to lure travelers to the southwest, the Santa Fe Railway commissioned a brown stucco pueblo style house on-site to be inhabited by Native Americans from Hopi Pueblo. Of course, Nampeyo was requested to represent the Hopi people as the pottery maker, and her daughter Nellie, who was about 14 years old at the time, accompanied her parents on the Atchison, Topeka, and Santa Fe Railway train to Chicago.  Nellie was perhaps one of the very few young Hopi who had spent a summer at the Grand Canyon and ridden a train to Chicago, Illinois.

This jar by Nellie was constructed in the traditional pueblo manner of coiling, scraping, and polishing the clay to a finished smooth surface on which a design could be painted using a paint brush fashioned from a yucca leaf.  The bowl is signed Nellie Nampeyo and there is a paper label attached to the underside of the style used by the Fred Harvey Company at the Grand Canyon.

Nellie Douma Nampeyo Ta-way "Sweet Corn Meal for Bread" was born in 1896 on the Hopi Reservation, Arizona, and died in 1978.

Condition:  this Hopi Pottery Seed Jar by Nellie Nampeyo is in very good condition.  Some of the brown paint has rubbed off but nothing of significance.  There is a single knick in the clay on one of the corn symbols

Provenance: previously from a Phoenix, AZ collector of Hopi pottery which we acquired in 2011 and sold to a client from whom we now have it back to sell.

Recommended Reading:  Nampeyo and Her Pottery by Barbara Kramer