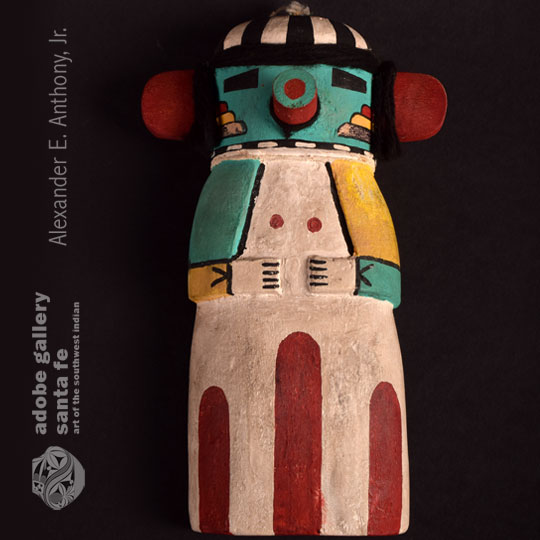 Katsina dolls of this style—flat or relatively flat—are the type presented to infants or toddlers.  They are considered safe as there are no small parts to break off or cause injury. This doll is not signed with the name of a carver, an indication that it was a gift to a child from the katsinas.  There is a Zia-style sun symbol painted on the back of the katsina’s head which may be an indication of the maker.We have been informed that this katsina doll represents Qa'ökatsina, one of the Corn Katsinas. There are a number of Corn Katsinas and each is represented in a different style.

In Harold S. Colton "Hopi Kachina Dolls with a Key to their Identification," on page 48, he indicates that Qa'ö and Avachhoya (Spotted Corn Kachina) are Corn Katsinas and he shows totally different drawings for the masks, neither of which is similar to this doll.

In Alph H. Secakuku's "Following the Sun and Moon-Hopi Kachina Tradition," he illustrates on page 72 a Qa'ökatsina that again is different in appearance from the ones in Colton. On page 77, Secakuku shows another Qa'ökatsina which he also calls Ngayayataqa Katsina, which, again, is a different style mask.

The point of the above is that there are a number of Hopi Katsinas that are under the general title "Corn Katsina" and Qa'ökatsina is an overall descriptive name for them.

Our informant stated that this Qa'ökatsina is a seed katsina, Poos'humkatsina, a name referring to seeds stacked up.

Condition: this Hopi Pueblo Qa'ökatsina, Poos'humkatsina or Seed Katsina Doll in the Flat Style is in very good condition