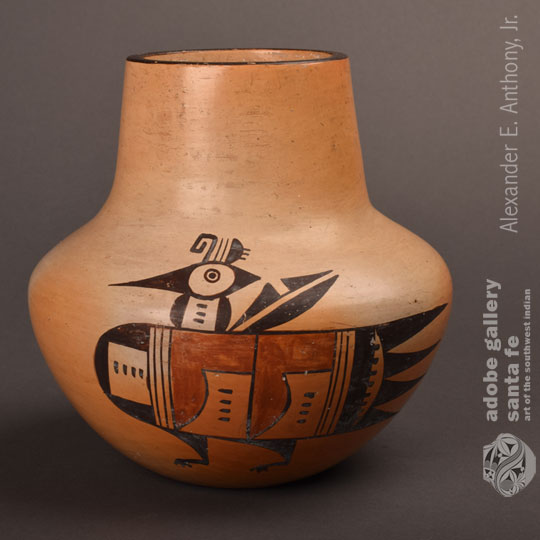 The striking aspect of this Hopi Pueblo potter jar by Emily Komalestewa is its simplicity in design of featuring only two beautiful birds on opposing sides of the jar. The birds are absolutely striking. Each bird’s body is massive and rectangular with a bulging breast and elongated tail feathers.  The bird’s head is circular with a single dot outlined with a circle for the eye. The beak is long and pointed and there is a triangular protrusion on the back of the head representing feathers. The top knot on the head resembles that of a quail. The bird has short fat legs and small feet.

Fortunately, the visual impact of the birds is not diminished by other design elements. They stand alone in magnificent splendor.

There seems to be very little published information about Emily Komalestewa in the standard reference books of pueblo potters, but, thanks to a website put together by Holly Chervnsik for the Native American Art Collection, I have been able to assemble the following:

Emily (maiden name undetermined) was married to Austin Komalestewa and they are the parents of Alton Komalestewa, a well-known potter who was married to the daughter of Santa Clara Pueblo potter Helen Shupla. Austin Komalestewa (1916-1987) was a grandson of Nampeyo and Lesou. His dad, William, was a son of Nampeyo and Lesou and he had a short life, having been born in 1893 and died in 1935. His wife also had a short life having passed away in 1918 when her son Austin was only two years old.

Therefore, Emily, a native of Santa Clara Pueblo, married into the Nampeyo family, moved to Hopi and has spent her career making Hopi pottery, such as this jar.