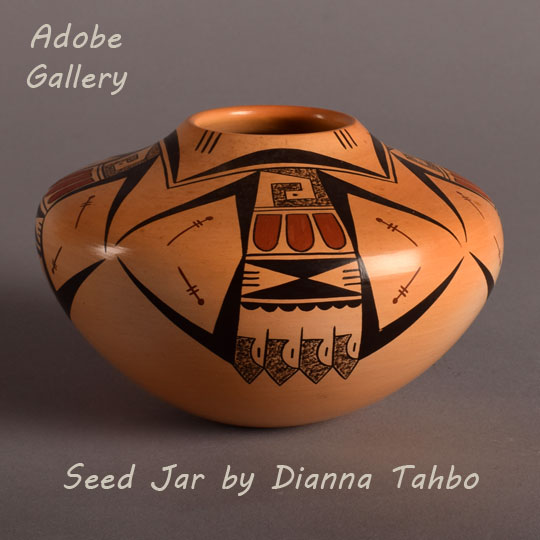 This small polychrome pottery seed jar was made by Hopi-Tewa potter Dianna Tahbo.  The influence of the artist’s older brother Mark Tahbo is apparent, as the jar was designed with precision and polished to perfection. The jar has a nice, classic shape. Its shoulders are strong, and its rim turns upward to about 45 degrees.

A complex design scheme is repeated four times around the jar’s exterior.  Vertical design bands are framed on each side by large triangles.  Each triangle is made of two bold black V’s.  Within each of these V’s is a small dragonfly. Viewing the jar from above reveals the complexity of these designs.  They repeat around the jar four times, with each repetition nearly identical in shape and size.  This is a fine piece of contemporary Hopi-Tewa pottery. The jar’s bottom is signed and dated Dianna Tahbo, Tewa/Hopi "94" and hallmarked with the Tobacco Clan image of a pipe.

Dianna Tahbo (1941-2011) was a sister of Mark Tahbo (1958-2017).  Her grandmother was Alma Tahbo and her great-grandmother was Grace Chapella.  She was an accomplished potter during the 30 active years she worked. She was greatly influenced by her brother Mark.  It does not appear that she was a prolific potter, however. There are few of her works available.