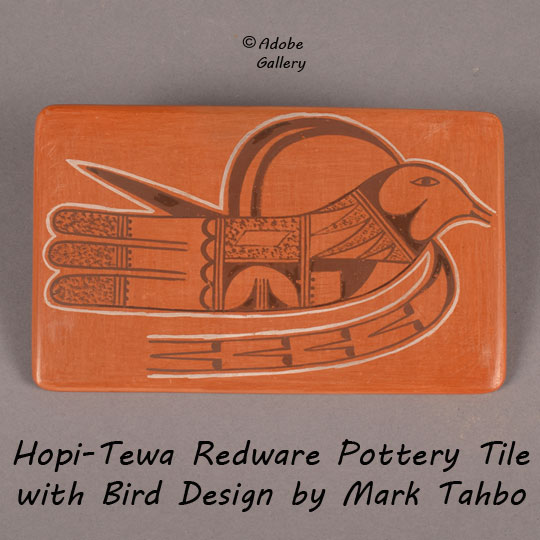 This redware pottery tile was made by Mark Tahbo of Hopi Pueblo. It dates to 2017—late in the artist's life and career. Tahbo brought this tile to Adobe during the 2017 Santa Fe Indian Market, along with more pieces in a variety of styles. Those who visited that year might remember Tahbo's near-constant presence as a charming and knowledgeable salesman of sorts, explaining his forms and designs to those who were curious. In actuality, he had already sold the pieces to the gallery, so his work was technically done—he stayed and talked with visitors because he took pride in his work and enjoyed sharing it with others.

This beautiful redware tile has an appealing rectangular form. The stylized bird design pays tribute to ancestral Hopi designs, as does the black and white over red color scheme. Tahbo used to experiment with clay from various sources on the Hopi reservation, resulting in finished works in a variety of styles and colors. Here, he incorporated Kaolin, which was used for the white lines that frame the bird design. This is a beautiful example of Mark Tahbo's work. The back of the pottery tile is signed with Tahbo's Tobacco Clan hallmark signature and dated ‘17'. A wood display stand is included.

Provenance: this Hopi-Tewa Redware Pottery Tile with Bird Design by Mark Tahbo was acquired by Adobe Gallery from the artist in 2017, sold to a New Mexico collector who is now downsizing