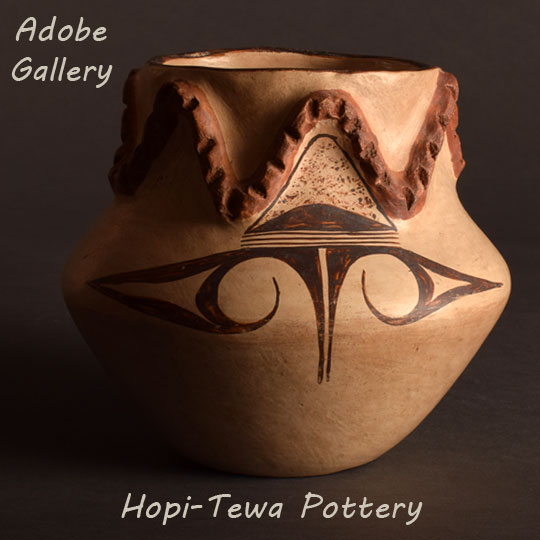 If a Hopi-Tewa pottery vessel could be defined as elegant, this is the one that deserves that accolade.  It rises from a flat bottom and flares outward to the midpoint where it then rolls inward and gracefully curves as it reaches the rim.  The widest point is at the mid-body.  In identifiable Nampeyo style, a rope of clay wraps around the neck in an undulating manner.  This clay is indented throughout and is the only red pigment on the vessel.  The rim and design were executed in dark brown pigment.

The design is another of Nampeyo’s interpretations of the Zuni-derived design of a triangle and spiral known as a “rainbird” design, yet, it was her sensitivity as an artist to place such a design on a jar to highlight its simple elegance and importance.  Above the rainbird spiral is a triangular-shaped rain cloud filled with speckling indicating moisture hanging over the dark cloud below.

According to Dr. Ed Wade, noted authority on the works of Nampeyo, a number of Corn Clan potters copied her work at the turn of the last century, particularly those potters whom she had instructed. He thinks that this could be by one of those Corn Clan women.  This jar would have been made in the first decade of the twentieth century.  If so, this would be as collectible as a Nampeyo jar because of the rarity of such.