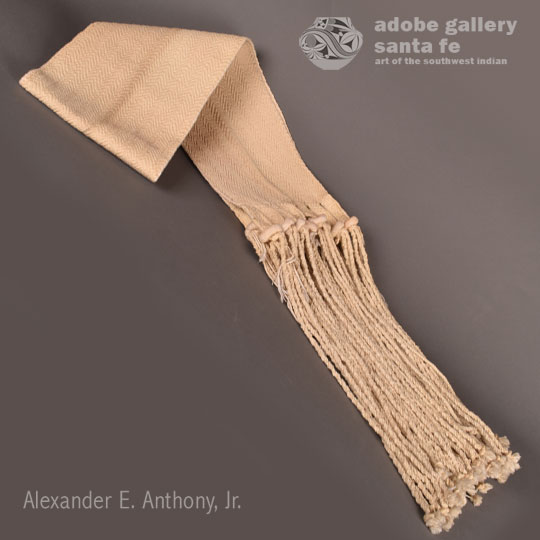 One of the items used by Katsina dancers and in Hopi weddings is a white cotton woven sash, wide and long with fringes at the ends which represent falling rain.  The doughnut-shaped rings at the starting point of the fringe are hollowed-out corn cobs covered in white cotton string.

Expressions of rain predominate in many ways in pueblo culture— on pottery vessels, clothing, ceremonial items, drums, wands, tabletas and many other items.  The pueblo world is based upon and dependent on rain. Symbols of rain are painted on vessels—tadpoles, dragonflies, clouds, toads and others.

The fringes sway gracefully when a dancer moves.  That, along with the drummers beating their drums, the sound of which represents thunder, will surely bring the afternoon rains.  Following the rains comes the rainbow.

Joe Herrera of Cochiti Pueblo, son of famous painter Tonita Peña, beautifully described the rainbow to author Tryntje Seymour.  “As the sun is still visible and there is rain in the distance, it creates this beautiful rainbow with all its colors. . . .The rainbow depicts all of the colors that exist on earth, and it plays an integral part in the manner in which we live: from this we have gathered all of these colors to use on the bodies of the dancers, on the costumes, the paraphernalia, the altars.  And seeing the rainbow at times when it rains, we know that it is a good omen. . . .The rainbow is very peaceful. . . .it shows us that there is beauty in this world.” -Seymour, 1988:188

A wide white rain sash such as this is also part of a Hopi bride’s wedding clothing.  Two of them are woven by the future husband's father as gifts for the bride. One of the wedding sashes is retained for use at her burial.

Condition: this Hopi Pueblo Textile Hand Woven Cotton Rain Sash with Fringes is in very good condition with evidence of pueblo use

Reference: Seymour, Trintje VanNess.  When the Rainbow Touches Down, Phoenix, 1988