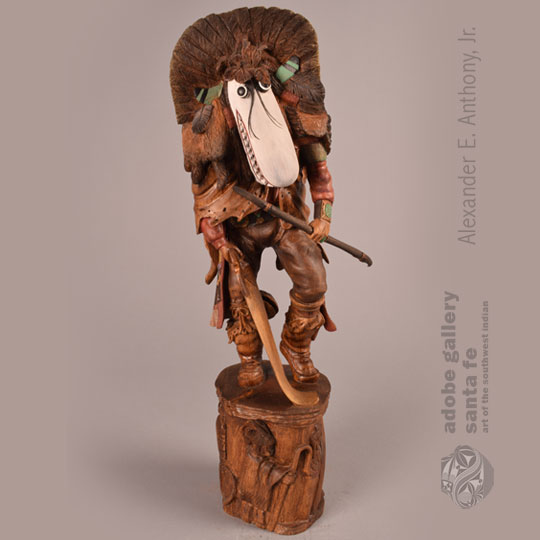 This wood carving by Hopi Pueblo artist Kevin Pochoema depicts a kachina doll that we've not seen previously from the artist: a Wiharu or "white ogre" kachina. Wiharu's purpose and performances are the same as those of the Nataska kachina. The only difference is Wiharu's color. Barton Wright's Kachinas: A Hopi Artist's Documentary provides a description of Nataska's (and, by extension, Wiharu's) appearance and function: "The fearsome Nataska always come as a pair. They accompany the Soyoko on their collection trip and usually stand directly behind the member of their crew who is bargaining with the relatives of the children. They make horrible noises, dragging their saws along the side of the house or on the ground. All the while, they keep up a steady stamping that makes the turtle-shell rattles on their legs sound ominously. They are supposed to be able to eat a child whole; from the very earliest age, the child has heard stories of these monsters-how they would descend on children playing near the village and haul them away to cook and eat. So it is no wonder that the children are petrified at their actual appearance. . . The feather fan is made of turkey feathers placed close together to form a large mass behind the head that makes the figures appear much taller and broader."

This Wiharu is one of the most exciting Kevin Pochoema carvings that we’ve had the pleasure of handling.  Pochoema’s Wiharu is a dramatic, visually arresting carving. The viewer’s eye will likely be drawn to Wiharu’s mask initially—it’s long and pronounced, bright white with prominently exposed teeth—before zooming out to appreciate the piece as a whole.  Wiharu is balanced and proportional, as detailed as collectors expect of Pochoema, and full of an energy that less experienced carvers are unable to capture. Its dark color is the result of a specific stain which Pochoema has used to great effect on some of his recent works. Acrylic paints were used sparingly here, resulting in colored areas that are subtle and beautiful.  The white mask, of course, is bold and bright. The other colors are fairly subdued, save for a few bright touches of turquoise and the sparkling gold that covers the blade of Wiharu’s saw.

Wiharu and the elaborate base upon which he stands are not attached to each other.  Impressively, they’re carved from a single piece of cottonwood. The only pieces that were attached are Wiharu’s bow and a pair of feathers that hang from one of his moccasins.  Pochoema’s recent works have all featured intricately decorated bases, and this piece is no exception. Here, the artist carved three more kachinas into the tall base. They are, from left to right, Masau'u, Soyok Wuhti, and Toson Koyemsi. The artist signed Pochoema near Wiharu’s right foot.  We are pleased to continue offering Pochoema’s carvings to our clients, as each one is a wonderfully unique achievement. Wiharu is, without a doubt, one of his finest.

Kevin Pochoema (1965- ) is a Hopi Pueblo Katsina doll carver.  Pochoema was born in Flagstaff, Arizona on February 2, 1965. At one point, he lived in the Hopi village of Bacavi on Third Mesa. Pochoema now resides just outside Santa Fe, New Mexico.  He is a member of the Greasewood clan. His works have been featured prominently in numerous books about Hopi carvings and are included in many prominent public and private collections. He has received prestigious awards and accolades for his carvings.