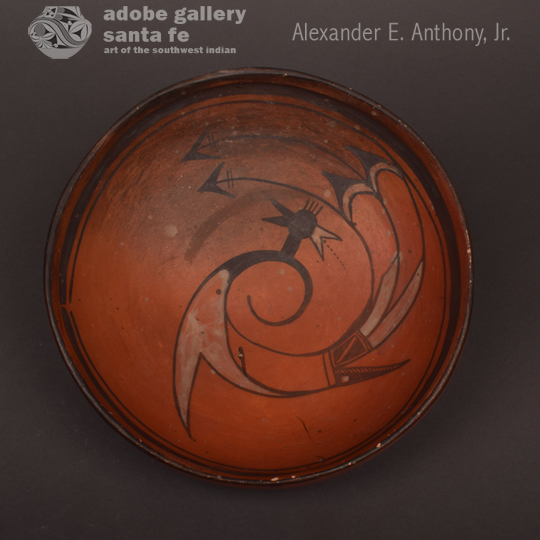 Annie Healing Nampeyo worked alongside her mother, Nampeyo of Hano, and the two potters created exquisite works of art.  It is sometimes difficult to determine which of them made a particular piece. Often, the use of white slip on a vessel is an indication that the potter was Annie but that may not always be the case.

This bowl is typical of the size and construction of those made by Nampeyo herself.  It also has the extra roll of clay on the inside of the rim, a technique used to strengthen the bowl.  Below the rim is a wide black framing line, also typical of Nampeyo. From there, it gets more difficult to state which of the two finished the bowl.  Perhaps Nampeyo made it and Annie painted the design.

Speaking of the design, it is quite unique, yet quite like an almost copy of a Sikyatki design that was being unearthed around the turn of the last century during excavations of the ancestral Hopi village.  The flow of the spiral representing the bird’s body is graceful and was beautifully executed. The double head of the bird is quite unusual in its dual-color presentation. It is the looseness of the application of the white slip that skews the identity of the potter as Annie, not as her mother.  Since the black pigment was so well executed, it is likely that the white slip, made of watery clay, was just too difficult to master. It appears thin and loosely applied in all instances when it was used so it is unfair to criticize a potter for less than perfect work when it is the material at fault.

Nampeyo of Hano was born in 1857 and passed away in 1942.  Her oldest daughter, Annie, was born in 1884 and passed away in 1968.  If Annie is assumed to have worked with her mom from age 18 until Nampeyo passed away, then the two potters would have worked together for around 40 years.  With Nampeyo mentoring Annie, it is understandable that their works would look similar and be difficult to define as to which one made it.

It seems fair to say that either Nampeyo or Annie made the bowl and Annie is the one who painted it.

Condition: this Hopi-Tewa Black and White on Red Historic Bowl by Annie Healing Nampeyo is in very good condition

Provenance: from a gentleman in Colorado who inherited it from his grandparents through his parents.  He stated “The red bowl was in my grandparents cabin built in 1921. My grandfather, born in the 1880s had a business in Durango. He bought Navajo rugs, pots and baskets to decorate the cabin. We have kept it as is, four generations later. The bowl may well have been old at the time.”

Recommended Reading: The Legacy of a Master Potter: Nampeyo and her Descendants by Mary Ellen and Laurence Blair