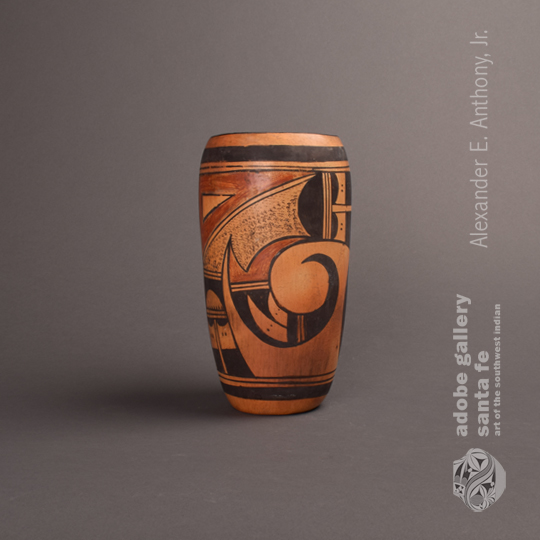 Recent studies of excavated prehistoric sites at Chaco Canyon (now a National Park in New Mexico) have revealed specimens of cylindrical jars. Anthropologist Patricia Crown, from the University of New Mexico, and a colleague, from the Hershey Center for Health and Nutrition, analyzed potsherds and found traces of a compound of cacao. From their research, they concluded that the cylindrical jars were used to hold chocolate in beverage form. Only a couple hundred complete jars have been found and most of them came from Pueblo Bonito, but many shards that would fit a cylindrical jar shape have been unearthed.

Based on their research, there is a history for pueblo cylindrical jars, but it is still likely that the reintroduction of them at Hopi was not for drinking chocolate beverages but for selling to collectors and tourists.  It is quite likely that Hopi trader Thomas Keam encouraged potters to make such jars as they would possibly appeal to tourists as attractive flower vases. Nampeyo and other potters made many such cylinders.

This cylinder jar is larger than many as it was an early one and was more to scale for a vase than the later ones that were made more as a curio piece.  The current owner says that this has been in her family for a hundred years, so, if it dates to circa 1920, it would fall within those made early with a function in mind.

The design is a stylized bird from pottery excavated from the ancestral Hopi Sikyatki ruins.  It has the long curved beak in black pigment and the pair of tail feathers, also in black pigment.  The stippling representing the body of the bird is reminiscent of Nampeyo’s style, but the bird is not the style documented as her work.  The bird is more in the style of Paqua Naha, the first Frog Woman. Before she started producing white ware pottery, she made the traditional Hopi-Tewa wares, similar to this jar.

Provenance: from a resident of Santa Fe who stated that it has been in her family for a hundred years.