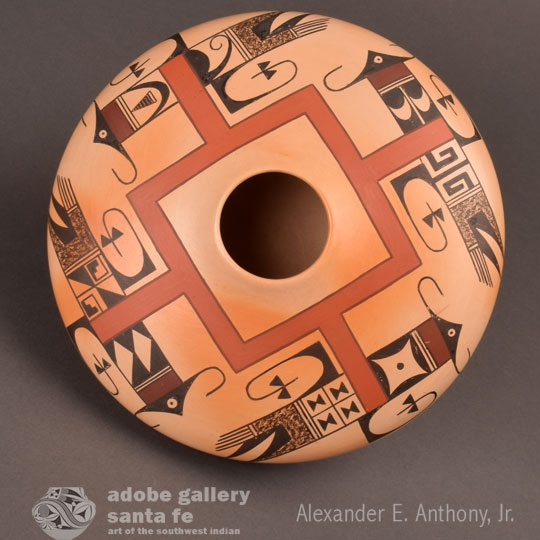 In this jar, Hopi Pueblo artist Mark Tahbo interpreted prehistoric Sikyatki pottery designs in a personal manner. Positioning a square around the opening with four attachments to the square is based on the Sikyatki layout, yet, he attached what we presume to be insects to the four lines of the box rather than bird designs seen on Sikyatki ones. This smaller version of a Mark Tahbo jar is as magnificent as his larger ones. Tahbo did not slack his effort on designing this one just because it is smaller. This jar is now over 25 years old, having been completed in 1994. It is an excellent example to demonstrate just how long Mark was creating beautiful works and just how talented he was even then. It is a pleasure to see that he was already using four colors in his work that early.

The insects’ heads are in the same style but the bodies vary in parts. The upper body, just below the birds’ heads vary in design as do the mid body just below the orange bar.  The tails are the same on each bird. It is interesting to learn that Mark used dark red slip as early as 1994, certainly one of the first Hopi-Tewa potters to do so.

This is an excellent example of Mark Tahbo’s incredible talent as early as 25 years ago.  He was an amazing potter and left behind a wonderful legacy in his pottery.

Provenance: this Hopi-Tewa Pottery Seed Jar with Prehistoric Sikyatki Designs by Master Potter Mark Tahbo is from an extensive pottery collection of a gentleman from Northern New Mexico