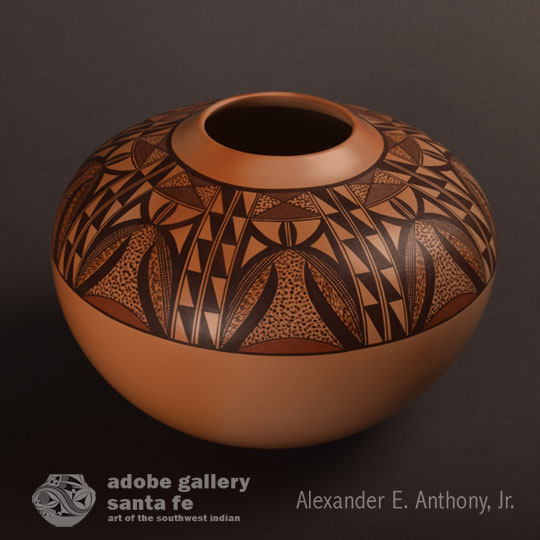 This globular pottery jar by Tewa-Zuni artist Les Namingha is beautifully filled with a band of design encircling the jar from just below the rim down to the midsection of the vessel.  There are eight design panels that expand fan-like and eight design bars filled with back-to-back triangles. The fan-like designs are triangular and curvilinear.  The triangles are stacked in pairs, two filled with dots and two filled with red pigment. The beautiful curvilinear elements are largely wide brown lines, brown dots resting on a red semicircle with corn-like borders. This is a 1998 creation by Les Namingha.

“Les Namingha is an exceptional potter.  His forms are well shaped. His painting is fine; his designs innovative.  His final polish is smooth. He is well respected. In the January 1998 issue of Southwest Art Magazine, Les Namingha was profiled in an article entitled, ‘Artists to Watch: Introducing six young artists on the rise.’” Schaaf 1998:85