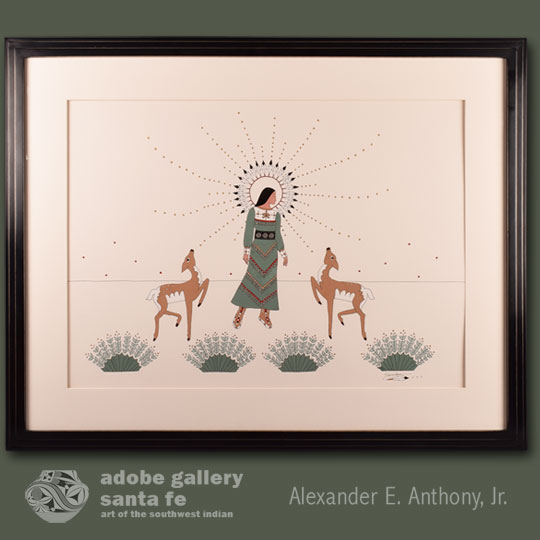 This large original painting was created by Hunkpapa Lakota painter and jeweler Sheridan MacKnight.  We deal mostly in works by now-deceased early pueblo and Navajo artists, but we’re always happy to explore the works of Native artists from other areas.  Occasionally, we come across artists of today whose works display the influence of the traditional styles. This unique and beautiful image manages to simultaneously work within and expand upon those traditional styles.  MacKnight’s wonderful paintings attracted our attention during the 2019 Santa Fe Indian Market, and we are pleased to have the opportunity to offer this one to our readers. The piece was completed using gouache and ink on archival watercolor paper.

Its title, “Tawacin Wasté Win,” translates to “good and compassionate woman.”  The woman is dressed in traditional Lakota regalia. The creation of this clothing is, according to the artist, “a ceremonial process in itself.”  It makes sense that it’s presented here in such careful detail, as it is of the utmost importance to its wearer and maker. The “good and compassionate woman” herself is graceful, elegant, and beautiful.  She is surrounded by a ring of eagle feathers. These eagle feathers are sacred symbols, as are the lines of dots extending outward from each feather. The two deer are clearly comfortable being close to the woman. This is, according to the artist, because they are aware of her compassionate nature.  Four sagebrush plants line the bottom of the image. A single horizon line crosses behind the woman and deer, effectively grounding the image. Red dots hover just above the horizon line, representing relations with the ancestors. It’s a large and impressive piece, with a presence that is at once powerful and calming.  We are very happy to be able to share “Tawacin Wasté Win” with our Native painting collectors.

The painting is signed “Sheridan” in lower right.  It was framed beautifully, using high-quality archival materials and a three-tiered black frame, by Justin’s Frame Designs in Santa Fe.

Sheridan MacKnight (1959- ) is Hunkpapa Lakota painter and jeweler who resides in Los Angeles, California and Santa Fe, New Mexico.  MacKnight is from the Standing Rock Reservation and White Earth Chippewa from Minnesota. She earned a BFA from Pasadena, California’s Art Center College of Design.  She has received many awards at the Santa Fe Indian Market, and has participated in shows at the Heard Museum, MoCNA, Hood Museum, San Diego Museum of Art, and Pablita Velarde Museum of Indian Women in the Arts.

Image of Sheridan MacKnight courtesy of the artist.