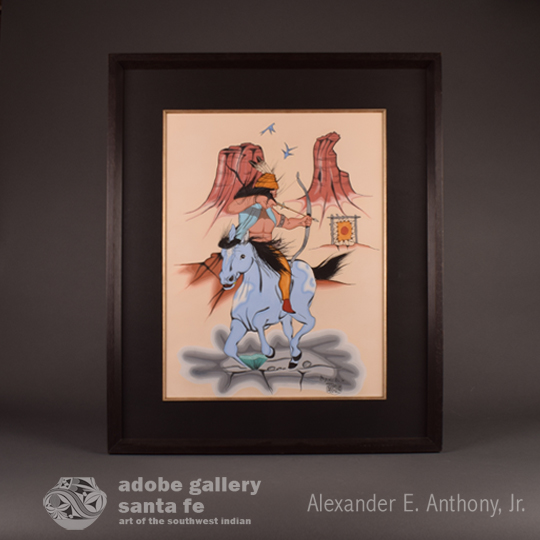 This painting of a Native American practicing archery is so much in the style of other young Native artists—Quincy Tahoma, in particular—that one might not immediately recognize it as the work of Tony Da of San Ildefonso Pueblo.  This early painting, completed while still in high school, serves as an excellent example of Da's considerable talents.  He loved painting and pursued it vigorously as he later would pursue pottery making.

It is unlikely that there are any collectors of New Mexico Native art who are not familiar with the name Tony Da, the son of Popovi Da and grandson of Maria and Julian Martinez.  Charles King and Richard Spivey have published everything there is to know about Tony Da so there is no need for us to try and add to that in this description, except to say that he was a brilliant artist—painter and potter.

When Tony moved in to live with his grandmother, Maria Martinez, in 1966, his painting career came to an end for a time while he learned to make pottery.  He adapted to pottery making as easily as he had to easel painting. Da, for the most part, stopped painting when he began making pottery. He did not return to painting until after a partial recovery from a severe accident in 1982.  After the accident, he was unable to make pottery, and so he began painting again.

Tony’s earliest signed paintings appear to be from 1957.  His signature at that time had not developed into the graphic style he later adopted.  The signature on this painting is Anthony Da and the date is ‘57, the year before he graduated from high school.  Below the signature is a cartouche that appears to be a jewelry design.  Tony made some jewelry while still in high school, so such an addition to his signature is not unusual.

This painting is a wonderful opportunity for the collector who wants to own a rare look into Tony Da's early artistic development.

Condition: this Painting of Indian Archer on a Blue Horse by Tony Da of San Ildefonso Pueblo appears to be in very good condition with some possible minor fading of background paper color. Framed with archival materials and a dark brown wood frame.

Provenance: this Indian Archer on a Blue Horse is from the collection of a family in California

Reference and Recommended Reading: The Life and Art of Tony Da by Charles King and Richard Spivey, 2011.