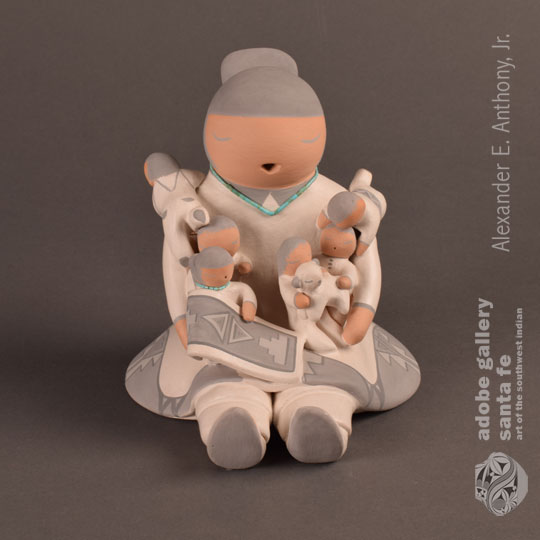 This storyteller pottery figurine from Isleta Pueblo potter Stella Teller is her style representing a Diné woman with a group of 6 children all over her.  One carries a Navajo blanket and one is holding her prized sheep. Stella has made storyteller figurines in the guise of Hopi women, Diné women and pueblo women of New Mexico.

Her pottery is distinguished from traditional Isleta Polychrome wares by its distinctive colors, which she says are all natural.  The light gray, which has become her trademark, is produced by mixing white clay with manganese. She stone-polishes the white slip and sometimes leaves the buff color in a matte state.  This storyteller figurine was made in 1988.

Stella Teller (b. 1929 ) has a long career of making pottery figurines and has consistently won prizes for them since she made her first storyteller figurine in 1978, the same year Adobe Gallery opened its doors in Old Town Albuquerque. Her great-grandmother, Marcellina Jojola, her grandmother, Emeklia Lente Carpio, and her mother, Felicita Jojola, all were potters.  Teller began working in clay at the age of eight, helping her mother apply slip and polish small pots. She is now a full-time potter creating figurines and pottery in her studio at Isleta Pueblo.