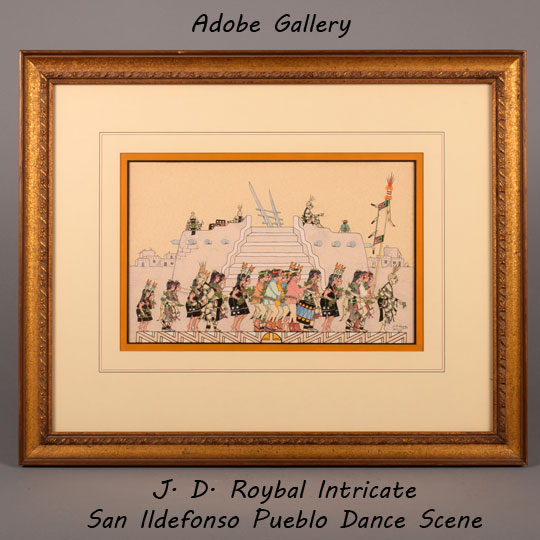 This intricate pueblo dance scene was created by San Ildefonso artist J.D. Roybal.  The painting is somewhat small but manages to comfortably contain over two dozen figures, which speaks to Roybal’s technical abilities.  A close study of any of these figures will reveal razor-thin outlines, careful shading, and remarkably detailed depictions of clothing and dance paraphernalia.  This painting is a wonderful example of Roybal’s considerable talent.

Roybal’s large dance procession takes place in an environment made of both realistic and decorative elements.  Behind the scene, we see the kiva, with a tall ladder emerging into a clear sky.  Three clowns sit atop the Kiva, resting in preparation for more dancing.  One of them smokes a cigarette as he stares off into the distance.  Further into the background, we see multi-storied adobe houses.  The main event covers the majority of the image’s bottom half.  The dancers’ feet land not on the earth but on a decorative element representing the ground: a short, wide rectangular design, within which a sun design and a repeating triangular pattern appear.

The painting is signed J.D. Roybal in the lower right.  It is framed beautifully in a carved wood frame under multiple mats in complementary colors.

José Disiderio “J. D.” Roybal (1922-1978) Oquwa - Rain God was a talented and accomplished painter from San Ildefonso Pueblo.  He is best known for his colorful and detailed depictions of San Ildefonso ceremonial rituals. He was a prolific artist, producing many small, single-figure pieces for sale.  None of these works—in keeping with the “flat” style favored by Pueblo painters of the time—contain a background or ground plane. Roybal painted a bit during his youth but became much more productive during the 1950s.  He exhibited and sold his works most frequently and successfully during the 1960s.  He was the nephew of early San Ildefonso painter Awa Tsireh.