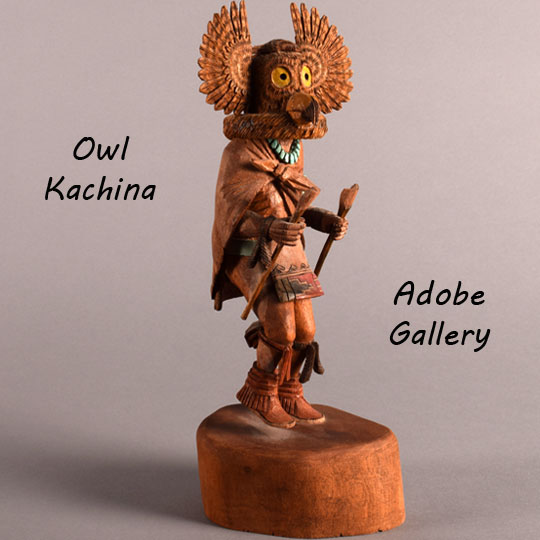 This exceptional all-wood carving of an Owl Katsina is basically a one-piece carving from cottonwood root.  The yucca whips, leg ties, and the arm tie were probably added separately.  The doll is 9 inches tall and stands on a 1-¾” tall pedestal.  It is signed with the name Honawa and a bear paw.  We have determined the carver is Jerry Honawa.

In the tradition started in the early 1970s, the doll was finished with oil-based stains in lieu of acrylic or other paints.  Small areas of the carving were highlighted with paints—the turquoise necklace, arm band, eyes and beak, and red on the loin cloth.  Otherwise, all the remaining parts were finished in stains.

Jerry Honawa is a Hopi of the Rabbit-Tobacco Clan and has been an active carver since the 1970s.  He lives at Hotevilla on Third Mesa of the Hopi Reservation in Arizona.

For those of us who hardly run around a block, Jerry is an inspiration.  In the spring of 2006, he and a group of Hopi runners trekked from Hopiland in Arizona to Mexico City to attend the “World Water Forum.”  He said his grandfather had told him in the 1950s that the Hopi were concerned about global climate change and its effects on water.  His grandfather said, “It will be warmer all the way into Winter months, you will not see the cycles as they are today and yesterday.”  [Schaaf, 2008:124] That was forward thinking on the part of a Hopi.

Provenance: this Jerry Honawa Hopi Mongwa Katsina, Owl Kachina Doll is from the collection of a gentleman from Arizona.