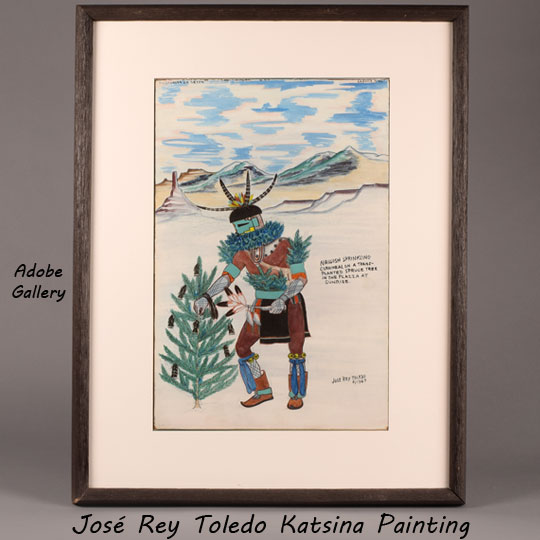 This original painting of a Nawish Katsina was created by Jemez Pueblo artist Jose Rey Toledo. In addition to the usual date and signature, Toledo chose to include text describing his subject.  It reads, “Nawish sprinkling cornmeal on a transplanted spruce tree in the plazza (sic) at sunrise.”  In the upper corners, he labeled the medium and setting: “watercolor on gesso” and “Laguna, N.M.”, respectively.

The katsina depicted here is part of the “Nawish Dance'' or “Corn Dance”, ceremonials that occur at virtually every pueblo.  The Nawish Katsina’s appearance may vary, but the headdress does not. There are always four turkey wing feathers set on top of the head.  This Nawish Katsina is brightly colored and quite appealing.  Further into the distance, Toledo used his watercolors to create a hazy mountain landscape.  Up above, a descending series of horizontal blue lines float within the white gesso background, forming a lively desert sky.  This is an unusual and delightful offering from Jose Rey Toledo.

The board is signed and dated Jose Rey Toledo, 6/1967 in lower right.  It is mounted within a white mat under plexi, in a simple wood frame.

José Rey Toledo (1915-1994) Towa, from Jemez Pueblo, was a man of many interests and talents.  He is listed as having been an art instructor, education health specialist, administrator of Indian health programs, actor, educator, lecturer, muralist, and painter.  It is this last category—painter—that is of particular interest to Adobe Gallery. His interest in painting was sparked by his cousin Velino Shije Herrera (Ma Pe Wi) of Zia Pueblo. Toledo attended the Albuquerque Indian School in the 1930s, then went to the University of New Mexico.  By 1955, he had obtained a master’s degree. After his time at UNM, he served as head of the art department at the Santa Fe Indian School. He obtained a Master of Public Health degree from the University of California Berkeley in 1972.

Provenance: this José Rey Toledo Large Painting of Nawish Katsina is from a gentleman in Albuquerque