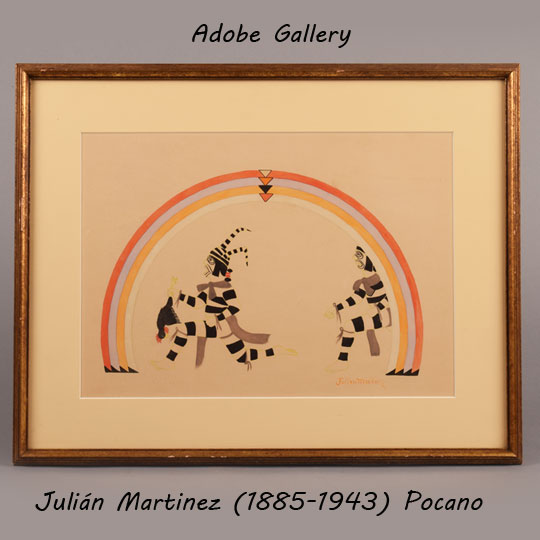 This original painting of clowns under a rainbow was created by Julian Martinez of San Ildefonso Pueblo.  Martinez’ works on paper are beautiful and rich in character.  They are rare, too, for multiple reasons—most notably, Martinez was often occupied with the task of painting designs on his wife Maria’s pottery.  He also worked a few different day jobs, maintained responsibilities at his pueblo, and lived a relatively short life.

This piece is a particularly spirited example of Martinez’ work.  It features two Koosa clowns.  One holds a chicken, and the other follows close behind.  Their dramatically outstretched legs suggest that they’re moving quickly and with purpose.  Martinez preferred to define his figures’ frames using bold blocks of paint within wispy but precise outlines.  Here, his outlines appear to have been completed first in pencil and then in a bright translucent yellow.  It’s a unique look that works quite nicely. The rainbow design within which they are framed echoes the pleasing rhythms of Martinez’ pottery designs and adds a welcome dose of color to the image.  This is a wonderful example of Julian Martinez’ work.

The painting is signed Julian Martinez in lower right.  It is framed nicely, using a thin wood frame and acid-free matting.

Condition: Very good condition.  A few minor imperfections in the paper, which is typical for works from this period.

Provenance: this Julián Martinez Original Painting of Clowns Under Colorful Rainbow is from a private collection

Recommended Reading: NATIVE AMERICAN PAINTING Selections from the Museum of the American Indian