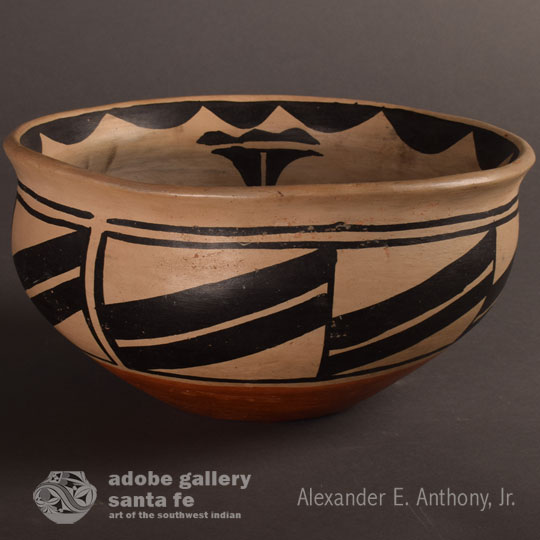 The hesitation in defining the origin of this bowl in the above title is because it is one that could have originated at Cochiti or Kewa Pueblo.  Therefore, we designated it as Keres—the language of both pueblos. The outturned rim is more a feature of Cochiti Pueblo but the strong black on the exterior is more like that from Kewa Pueblo.  The single rain cloud on the interior is something that is generally not seen on any Kewa pottery, another fact leaning toward an origin of Cochiti.

The Keres Pueblo Large Pottery Serving Bowl is most interesting with the outturned rim, something that sets it above most serving bowls from the Keres Pueblos.  The single rain cloud design on the interior is also a unique design not generally seen on such bowls.  The potter of this bowl was creative, artistic, and expressive.

The bowl was made for use at the pueblo as indicated by the initials SPT carved on the exterior red underbody.  Initials of this type are applied to bowls that are used for communal servings at ceremonial functions.  It is an identifying mark to ensure that the bowl is returned to the rightful owner following the ceremony.  It may or may not be the maker's intitals.

Condition: the only fault is a short slip crack on the interior bottom which would not preclude use of the Large Keres Pottery Serving Bowl. THE “RAIN BIRD” A Study in Pueblo Design [SOLD]
by Harry P. Mera