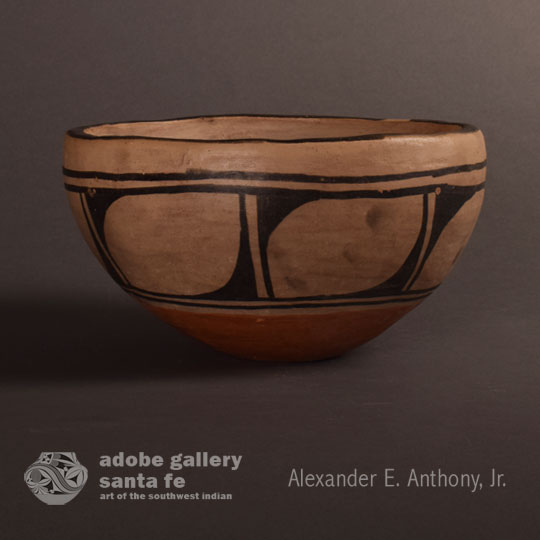 Visitors to the gallery often ask “what is the meaning of that decoration?”  Our usual response is that it probably has no meaning.  That seems better than saying, "I don’t know".  Most likely, many designs are repetitive from generations of use in a family and the later generations using those designs do not know their meaning, if there is a meaning.  It is just a design that their mother and grandmother used so they continue using it.

To the older generation, there may have been meaning to designs chosen and the meaning may have been reserved for specific vessel shapes.  A design used on a chile bowl would be different from one used on an olla.

Maria Martinez once told Kenneth Chapman that “she viewed both the discrete design elements and their combinations as stories possessing meaning.” Verzuh 2008.  There is no indication that she expanded into telling him the meanings of any designs, however.

This chile bowl, like most, has a simple design as one would expect to see on a vessel this small. The design is a repetition of ovoid elements achieved by painting opposing corners with black vegetal paint.  As always on bowls from Kewa Pueblo, the rim is black and a ceremonial break extends from the rim through the entire design pattern.