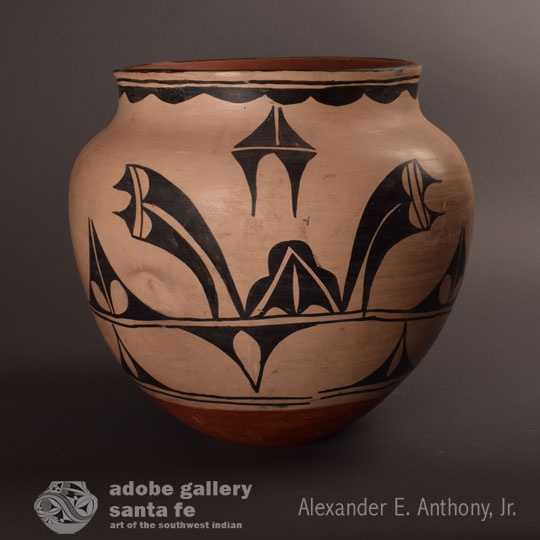 The surface of this storage jar is quite substantial, providing a large area on which to paint the body design. The short neck enhances the considerable size of the body.  The red band below the decorated panel—wiped on with a rag, usually—is indicative of a pre-1920 period. Storage jars rarely indicate wear from having been used because they generally were used for dry items, not water, so no stains resulted.  It is difficult to determine if this one was used at the pueblo before it was sold.  This Santo Domingo Historic Storage Jar is attributed to Felipita Aguilar Garcia.

The striking design on the upper half of the vessel certainly relates to rain, clouds—water sources.  The most prominent features are pairs of black lines curving up and out, increasing in width. These have been referred to as “spread-arm” designs. The small element floating above and between these represents a cloud, from which a soft rain is falling.  Rain symbols are often used on pottery; the artists are at once expressing gratitude and asking for more. Rain is very important to New Mexico and is always scarce, so a plea for help from the Great Spirit is understandable. This is a unique and wonderful storage jar that may have had special significance to its desert-dwelling creator.

According to Jonathan Batkin (see reference) the unpublished notes of Kenneth Chapman recorded that this design was invented by a potter with the surname of Garcia between 1905 and 1910. Most assuredly, he was referring to Felipita Aguilar Garcia, one of three related potters who supplied Mr. Seligman of the Bernalillo Mercantile Co. with pottery of this shape and style for his clients.

Note: in 2009, Santo Domingo Pueblo's tribal council changed the pueblo's name back to the ancestral name Kewa Pueblo (pronounced KEE-wah).  We will continue referring to historic pottery with the termatology of Santo Domingo pottery as it was known at the time it was made.

Provenance: from the collection of a gentleman who lived near Kewa Pueblo for a number of years and collected pottery from pueblo families.