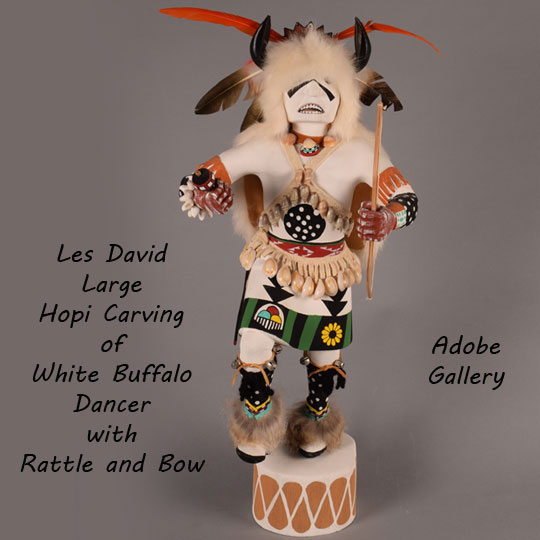 The White Buffalo Dancer is considered a non-katsina figure, and a social dancer. Many of the social dance figures, like the Poli Mana, Konin and the Buffalo dancers have two forms—social dance, unmasked variety, and a masked, or katsina impersonation.

Les David is an artist known for fine detail and superior representations of Hopi katsinam—a fact he has absolutely showcased with this carving of the White Buffalo Dancer.  It is hard to determine the most striking element of this carving.  From its impressive size to its salient bright coloring, if impersonated accurately one can only imagine how awe-inspiring White Buffalo Dancer would be in real life. Caught in a moment of dance and song, this dancer lifts one foot off of his drum base, and open mouthed extends both arms up in the fluid movement of ceremony.  A Sunface strikes the center of his headdress from which magnificent feathers extend in all directions but up.  Underneath his feathers, majestic white fur covers his head and extends down his back with black-feather-adorned horns reaching outward and upward, just as a buffalo’s do.

Regal shells bedeck his right wrist, neck, leather crossed chest, and encircled waist. He holds a rattle in his right hand and hunting bow in his left.  A grand ceremonial kilt and sash drape his lower half while one can almost hear the ringing from the bells tied around his calves.

Fur-wrapped ankles with colorful ribbon give way to white moccasins and in finality express the movement of this social dancer, conveying a moment in time so well it is as if we are at the dance itself.  Les David has a one-of-a-kind way of carving and adorning his work that allows us a very specific peek into the Hopi society—and for this, we are exceptionally grateful.

Hopi carver Leslie David is the father of Kerry David and married to Nora David and they live between Polacca and Keams Canyon on the Hopi reservation in the northern part of Arizona.

Condition:  this carving is in excellent condition with only one shell missing from the belt.

Provenance: this Les David Large Hopi Carving of White Buffalo Dancer with Rattle and Bow is from a private collection