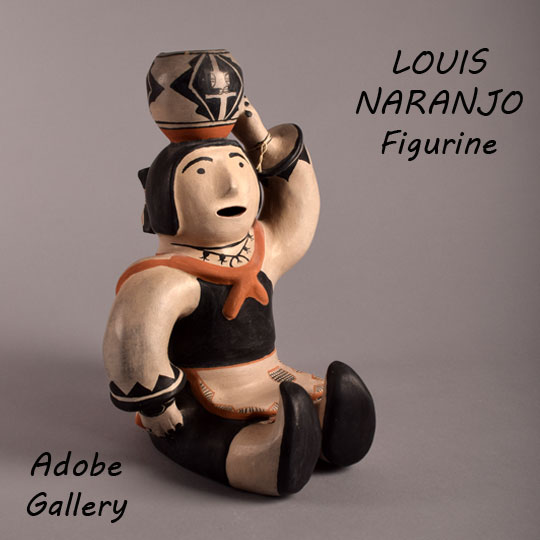 This Cochiti figurine by Cochiti Pueblo artist Louis Naranjo features a pueblo woman holding a jar on her head with her left hand.  She clearly shows the beginning of the new style of Louis Naranjo’s figurines—fatter figures with curved fatter arms.  This is a style he would continue throughout his career.

The cream bentonite slip reflects a beautiful burnish.  The black guaco is dark and evenly applied.  The orange slip is consistent in application.  This jar was purchased in 1983 and clearly shows that Naranjo had achieved great success in just a few years.

Louis Naranjo entered this figurine in the 1982 Cochiti Pueblo and Cochiti Lake Arts and Crafts Festival where it was awarded a First Place.  We then purchased it from him and sold it to the client from whom we now have it back.  It is in original condition.